Why Were There No Female Superheros

Why did it take society so long before we would even begin to accept strong, assertive female leaders? The answer, perhaps, lies in an unexpected place ... comics: society's archetypes, and the symbols of beauty.

One of the great unknown thinkers of the 20th century was a fellow named William Marston (1893-1947). Marston was a sort of Freud-crossed-with-Leonardo-Di-Vinci-type who was, among other things, a prominent Harvard psychologist, inventor of the DISC theory (the basis of the world famous DISC assessment), inventor of the lie detector (the forerunner to the polygraph), and inventor of the comic book character Wonder Woman.

Marston was also a women’s rights advocate and in 1940, when he was serving as an educational consultant for DC Comics, noticed that they had no female superheros. In fact, no comic publishers had any successful female heros.

Marston was extremely interested in the prevalent gender 'ideal' of the time; namely, that men were expected to be strong and dominant, and women were supposed to be weak and submissive (and never the other way around). In the 1940s, comics had a far stronger influence than how many of us see them today (as a niche market for geeks). In the absence of TV, comic book heros in the mid-1900s were celebrities. This, too, meant they had power. So Marston took the question to the man at the top of DC comics: why was there not any female hero? Max Gaines, then head of DC Comics, was intrigued by the concept and told Marston that he could create one — the very first 'superwoman.' 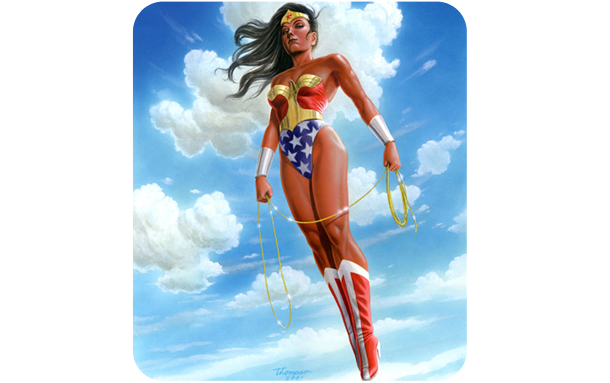 Wonder Woman’s magic lasso could make all who are encircled in it tell the truth — a notable link to Marston's original work on lie detection.

In the early 1940s, the DC Comics line was dominated by super-power endowed male characters such as Superman (its flagship character) and Green Lantern, as well as Batman who became known for his high tech gadgets.

Wonder Woman was crafted as an Amazon Princess, and the Amazons, who were created by the goddess Aphrodite, were made to be stronger and wiser than men. In other words, Wonder Woman was never intended to be some dumb blonde pin-up girl, but was, for all intents and purposes, superior to any male rival.

Marston wanted his character, which he called 'Suprema' (later changed to Wonder Woman by an editor), to combine all the strength of Superman plus all the beauty and inherent kindness of a woman.

The idea of introducing an athletic, smart, and wickedly strong female into the fraternity was risky — would the public accept a dominant female? Women were often drawn as characters to be sexy, but the question was: could sexy co-exist with strong? It probably seems a little hazy in the collective memory now, but the perception of a ‘good' woman back then was one of obedience, submission, passivity (the non-sporty type) and, basically, sexy = weak.

Marston wrote: 'Women's strong qualities have become despised because of their weakness.' That is to say, it was seen a deficiency for women to be physically or mentally stronger than men (that something was seriously wrong with them — and unattractive — if they deviated from the norm).

He felt that comics had tremendous educational force and that the world needed a feminine archetype to look up to — one that made it OK for women to be strong, assertive, commanding, powerful and dominant.

Apparently, the public thought it needed one too.

And so that’s the story of how Wonder Woman became the first ever female superhero.