What is Emotional Intelligence

If you think about the sort of skillset that you would need in order to be a highly successful CEO of a Fortune 500 company, what comes to mind?A high IQ?... Probably.

A solid education?... We would think so.

In this video, Richard Branson, the billionaire founder of Virgin Group, reveals something that will drop your jaw to the floor: he never knew the difference between net profit and gross profit!

If you’ve ever read one of Branson’s books, you will know he is very candid about his troubled times growing up. He had dyslexia and poor academic performance as a student, but later discovered he had the ability to connect with others, which would prove invaluable when starting up Virgin Records in the 70s.

Though it seems strange now, the dogma back then was that IQ was the most important factor in determining one’s success, yet Branson’s career highlighted that there was a growing demand for a completely different type of intelligence in order to be successful in the new economy.

Goleman describes being hit with a tidal wave of attention from the business community. Many prominent CEOs and executives told him they finally had a new language to articulate the core traits that had helped them succeed, despite being school dropouts like Branson.

Three years after his landmark book, Goleman wrote an article in Harvard Business Review called “What Makes a Leader?”, which attracted a higher percentage of readers than any other article published in HBR in the past 40 years. When the CEO of Johnson & Johnson read the article, he was so impressed that he had copies sent out to the 400 top executives in the company worldwide. HBR still lists the article as one of its ten “must-read” papers of all time.

TIME Magazine apparently thought something of the idea too, calling Emotional Intelligence one of the 25 “Most Influential Business Management Books.”

Caption: "What's Your EQ? It's not your IQ. It's not even a number. But emotional intelligence may be the best predictor of success in life, redefining what it means to be smart."

Today, there are three leading thinkers on Emotional Intelligence:

"An array of non-cognitive capabilities, competencies, and skills that influence one's ability to succeed in coping with environmental demands and pressures."

“A form of intelligence that involves the ability to monitor one's own and others' feelings and emotions, to discriminate among them and to use this information to guide one's thinking and actions.”

“Emotional Intelligence refers to the capacity for recognising our own feelings and those of others, for motivating ourselves, and for managing emotions well in ourselves and in our relationships.”

With our work in this field, we would define EI as: “The ability to sense, understand and effectively apply emotions to facilitate higher levels of collaboration and productivity.”

We subscribe to the 5 competencies set out by Daniel Goleman, as we find this to be the most business friendly model:

1. Self Awareness - The ability to recognise and understand your own moods, emotions and drives as well as their effects on others.

2. Self Regulation - The ability to control or redirect disruptive impulses and moods. This includes the propensity to suspend judgment and to think before acting.

3. Motivation - A passion to work for reasons that go beyond money or status and to pursue your goals with energy and persistence.

4. Empathy - The ability to understand the emotional makeup of other people and the skill to treat people according to their emotional reactions. 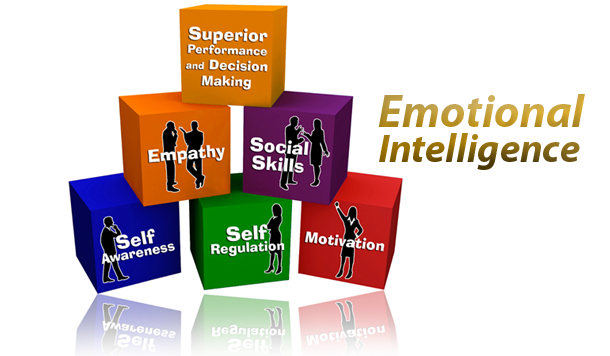 At the end of the day, EI is all about being aware of our own internal state, the way others are reacting, and how we can facilitate the best possible outcome for all involved.