Employee engagement is the degree of emotional commitment that an employee has to his or her job and the organisation as a whole.

Aon Hewitt had two notable announcements in the last month. The first was the release of the Trends in Global Employee Engagement 2013 report, and the second was their annual Best Employers list. (Leading research on organisations with the highest levels of employee engagement and the best people practices.) 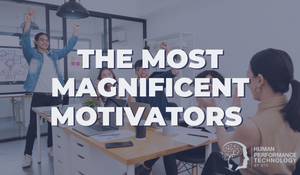 The Most Magnificent Motivators

For a long time it was believed that if you wanted to have more satisfied, motivated workers, then the only thing you had to do was pay higher wages. Herzberg’s Motivation-Hygiene Theory (1959) head kicked this notion by being first to suggest something that would turn out to be fundamental to employee engagement and has been taught in universities ever since.

The movie Office Space (1999) satirises work life in a typical 1990s software company and, while not as well known in the mainstream, it became a cult classic among those in the IT profession.

6 Things You Need to be an Employer of Choice

What is an EOC? An EOC is a term that is thrown around a fair bit. Basically it's earned on recognition that a company is seen to be great place to work and is therefore a top of mind choice for candidates in that given industry. This recognition may be based on general public sentiment, or awards won through magazines and industry institutions.

In this series, we are talking about 6 key drivers that come up time and again in the research on employee engagement. This is part of #5: Good Culture and Co-Workers.

In this series, we are talking about 6 key drivers that come up time and again in the research on employee engagement. This is part of #4: Good Company Leadership.

In this series, we are talking about 6 key drivers that come up time and again in the research on employee engagement. This is part of #2: Meaningful and Important Work