Have you ever asked yourself, "Could I be doing more with my time?" If you've asked yourself this question in 2020 or 2021, it might be because of the immense disruption to our work and personal lives that took place over that time.

The global pandemic shifted the way we work and live. The most predominant example of this is that much of the global workforce commenced (or expanded) their work from home arrangements. With this shift, there has been a renewed focus on productivity. Why is that? Frankly, it's probably because managers weren't sure if their teams would be productive from home. That might be a sign of a few things: a lack of trust from managers; no appropriate performance management practices in place; or old school thinking that we need to "see people on the floor." This would differ business to business based on a number of factors.

When it comes to productivity, we believe that high productivity stems from undertaking meaningful work, maintaining one's wellbeing and health, as well as creating personal time and space to think. Truly, we see that as the trifecta of productivity. That said, we appreciate that our clients look for resources, tips and "how to" approaches so we've compiled this list of top 10 tips to be more productive at work. 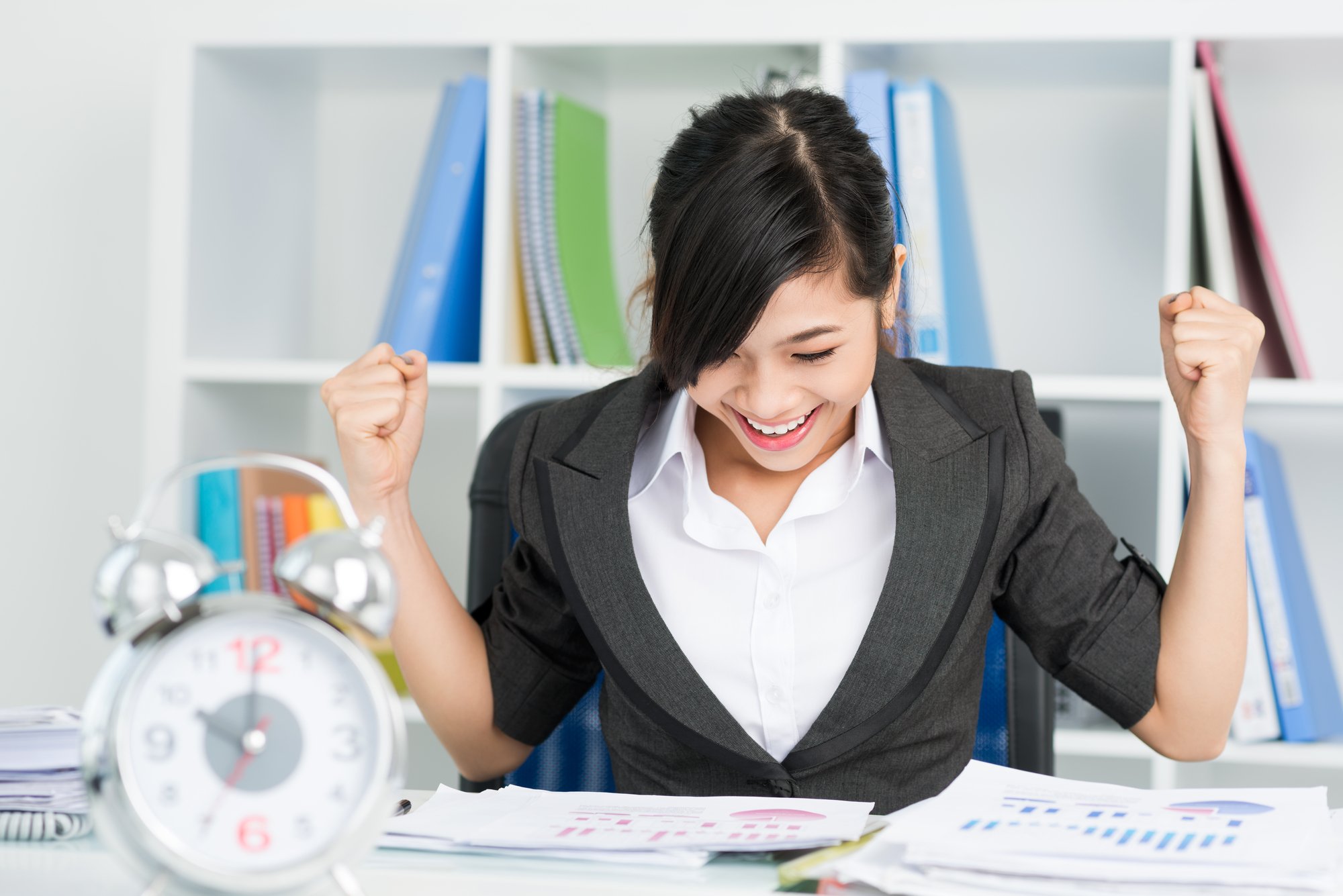 1. Eat That Frog: Complex Work When You’re Most Alert

Tony Schwartz famously said that the key to productivity is not managing time but energy. We are typically most alert, focused and motivated in the morning. Many people squander this time by trawling through their emails, checking the news, organising their day, and ticking off the “low hanging fruit” on their to-do list before warming up to the more mentally challenging tasks.

If this is the case for you, try something different! Use this time to do the single most difficult task on your list. Do what Brian Tracy recommends in his book and "eat that frog!"

Peter Drucker once said, "There is nothing so useless as doing efficiently that which should not be done at all." The significance of this point was not lost on Stephen Covey, who observed that businesspeople often spent their time consumed with busy or “urgent” work, and they neglected the work of real importance. Activity ≠ productivity.

Just because you got a lot of stuff done in a day does not necessarily mean that your actions made any real impact on the success of your organisation, your chances of getting promoted, or your life story in any kind of meaningful way. (Sorry to be a downer.) The 80/20 Rule (a.k.a. Pareto’s principle of unequal distribution) points to a general pattern in which people find that about 20% of inputs produce about 80% of results. In other words, what are the critical few tasks that have a disproportionately positive impact on your career/well-being/health? Do more of that stuff!

Once you know what is important to your job and adds real value to your life, you need to make sure you don’t get sidetracked, and that means getting comfortable with saying “no.” Distractions, which can come in the form of phone calls, emails, social media, or other shiny objects, are the most dangerous daily threat to productivity.

4. Prioritise: Use the Time Management Matrix

The Time Management Matrix (a.k.a. the Eisenhower Decision Matrix), as popularised by Stephen Covey, is easily the most popular model used in time management training. The matrix provides a relatively simple way of assigning priority to tasks by sorting them into one of four quadrants based on whether something is Urgent and Important. These 4 quadrants are often translated into the 4 D’s of Time Management: do it, delegate it, defer it (schedule it), drop it. 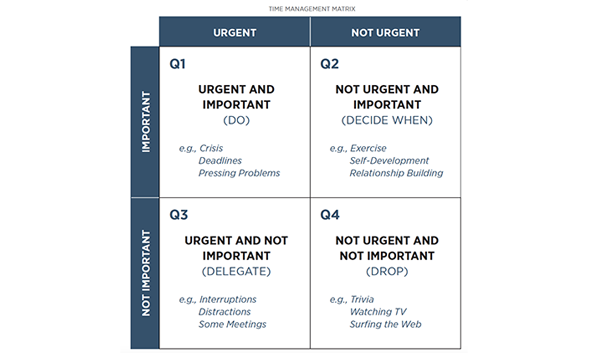 If you’ve ever been given a major project at work, it can feel like you’ve been asked to climb Mt. Everest. Feeling overwhelmed leads to procrastination. This is one of the classic mistakes described in the productivity literature. Read the inspirational story of Joe Simpson, who was left for dead on a mountain after breaking his right leg and falling 150 ft into a deep crevasse, only to crawl five miles back to base camp over 3 days without food, on the brink of exhaustion, and suffering from hypothermia. You will believe it’s possible to achieve nearly anything, if you just focus on crawling a few feet at a time.

One of the things that make video games so addictive is that game designers know humans are motivated by a stream of small, consistent rewards: bonus points, unlocking achievements, levelling up, high scores, and personal best times. Small victories to pursue, however trivial they may seem, can have the effect of increasing dopamine: the pleasure-reward hormone.

Cultivating a game-like sense of progress in daily work is key to motivation, and motivation is the engine of productivity. Harvard Professor, Teresa Amabile, found that the single most powerful event that influenced people’s inner work life is "making progress in meaningful work". Amabile is quoted in her book, the Progress Principle, as saying: “Even when progress happens in small steps, a person’s sense of steady forward movement toward an important goal can make all the difference between a great day and a terrible one.”

Taking breaks supports productivity. As reported by the Atlantic, an experiment by the Draugiem Group found that the most productive employees weren’t necessarily the "hardest" workers. They found that the perfect work to break ratio is 52:17 (i.e. 52 minutes of work, followed by a 17-minute break).

Similarly, in a study of elite violinists, the psychologist Anders Ericsson found that 90 minutes of focused work followed by a 15-20 break was best for optimal performance.

Dan Ariely, behaviour economist and author of Predictably Irrational, says, “One of the big lessons from social science in the last 40 years is that environment matters." Our environment influences us to a much greater degree than we might realise or care to admit. For example, workers make more mistakes when the temperature drops below 20 degrees Celsius (the optimum is between 21 and 25 degrees). Increasing natural light makes workers less tired. Workers in windowed offices work harder than those in windowless offices. Creative thinking can be enhanced by dim lighting. Certain colours subconsciously affect our mood (e.g., warmer colours like red and yellow can increase blood pressure; cooler colours like green and blue can lower it).

Look around at your surroundings (especially if you're working from home). What small things could you tweak that could make a massive difference to your performance?

9. Clarify Over the Phone and Summarise Over Email

The type-and-click convenience of email belies the fact that email often creates more work. For one thing, written communication is much slower than in-person communication due to differences in how people speak versus how they construct sentences on paper/email.

Critically though, written words and tone can easily be misunderstood. Something that should take no longer than 2 minutes of in-person time can easily be stretched out to 2 days of emailing time due to a small misunderstanding. Add multiple people to the CC box and welcome to email hell!

The best time-saving rule when it comes to email is to quickly clarify anything important that could go wrong or lead to confusion over the phone and then summarise the key discussion points, deliverables, and/or outcomes over email (usually in bullets). It's worth it to pick up the phone and say, "I have a quick question. Can I clarify what you're asking for?"

It’s been well established for some time that multi-tasking isn’t good for productivity. As reported by the American Psychological Association, researchers have demonstrated that multi-tasking “can cost as much as 40% of someone's productive time.” The most recent neuroscience research explains that oxygenated glucose in the brain is used up more rapidly by regular task switching. Multi-tasking not only makes you tired faster and kills your ability to focus, but it also makes you eat more and - for coffee drinkers - your body requires more caffeine to cope with the increased mental demands.

Note: This blog post was originally shared on 12 July 2016, and it was refreshed and republished in April 2021 with up to date information and context.