The Most Misunderstood Dimension of Personality

In physics, there are objects of study that stupefy and ensnare, objects that have swallowed geniuses whole, objects whose continued investigation open deeper and darker doorways into the mind, labyrinths from which there is no escape, no resolution, no happiness, nothing.

Only madness waits. Among the most enigmatic of these beasts are gravity, quantum mechanics, and — the strangest, most baffling and perplexing dimension of our universe — time. None hold a candle to the supreme challenge of deciphering the texts of Shakespeare, but still…

I return to my circle of competence.

In personality psychology, there is a similar cursed phenomenon…

A mystery of epic proportions…

(My favourite Brain Pickings article, I’ll Be You and You Be Me, closely followed by H is for Hawk)

The Extraversion-Ambiversion-Introversion (E) dimension of personality.

Actually, that’s only partly true. When it comes to E, people are all over it with the talking/writing (the people, they doth love that) but, oh boy, is E poorly misunderstood. It was this quite unhappy state of affairs that compelled me to skip-itty-skip over to my table and click-itty-click away at my computer to work through the confusion, even though the way I will ultimately sum up this learning adventure is oh no, there’s a bunch of things and stuff and it’s kinda messy and I’m sorry rather than everybody’s whack, here’s what ya need to get in ya flurking noggin.

Being conscious of the tribal element sometimes cropping up in discussions about introverts (vs.) extraverts, I’m given to ponder: Is it worth it? Do I poke the beast? Do I dare disturb the universe? *shrugs emphatically* Yes! I guess so!

But first, lend me a sympathetic ear, my dear beloved reader/skimmer, for today’s post isn’t exactly new or ground-breaking. It can, I hope, serve as an illuminating summary reference, recapping myths, misconceptions, and the major issues surrounding this subject. To quote the great and terrible Galadriel (my favourite Lord of the Rings character and objectively the best candidate for Empress of the Realm, any realm, earthly or fictional), may it be a light to you in dark places, when all other lights go out.

(The Fellowship of the Ring: Galadriel gives Frodo the Light of Eärendil) “What is it that makes an introvert an introvert or an extravert an extravert? And the truth is there are as many answers to this question as there are personality psychologists.”— Susan Cain

There’s a range of differences and disagreements among researchers and a significant rift between psychology’s use of the terms and the general public’s understanding. There’s Carl Jung (the populariser of the terms) who talked about the direction of psychic energy. There’s those who say it’s about the degree to which socialising energises/drains you (and psychologists who say that’s unsupported by research). There’s E via the Myers-Briggs Type Indicator (the most widely used personality inventory in the world, focusing on one’s preference for the inner world vs. the outer world). There’s E via the Big Five Model (the closest thing academics have to an official definition of personality, summed up by Steven Pinker as the five factors tied to most of a dictionary’s18,000 adjectives for personality). There’s researchers who distinguish between multiple types of introverts. And there’s the increasingly strong view that it all essentially boils down to sensitivity to stimulation with evidence showing that introverts experience more neuronal activity.

Some say “extraversion,” others prefer “extroversion.” There’s no right version, so just every guardian of The One Language Doctrine cool down, please. Extra and Intro stem from Latin, meaning “outside” and “inside” respectively. Jung used Extraversion, which is typically preferred in more technical writing, in psychology, and by vendors that sell psychometric assessments (like me!... I’m nice, I promise). Extroversion is the prominent spelling more generally. (The people, they doth love to do things differently.) Scientific American has a fun article in exquisitely beautiful plain English about the “correct” spelling of E, which I’m linking to here because it made me smile.

It’s Not Introversion Against Extraversion

For all the years of “myths about” articles, memes, and webcomics about introversion, a palpable and persistent stigma was still very apparent… until 2012. This was the year Susan Cain gave her viral TED Talk (20+ million views) and published “Quiet: The Power of Introverts in a World That Can't Stop Talking” which hit a cultural nerve — specifically, I think, in counteracting the stubborn belief that introversion is “somewhere between a disappointment and a pathology.” Some argue that the pendulum is swinging too far in the opposite direction with extraversion being criticised and disparaged — or seeming to be. I’ve certainly seen some misguided activism, but that being said, history has demonstrated time and again with social and political movements that a rally cry of “Power to Us” is heard by some as “Down with Everyone Not Us” and this is not Cain’s actual message or goal. Ultimately the “quiet revolution” comes down to restoring the yin-yang balance of seeing both traits as valuable. Introverts are often genius creatives and world builders, complemented by extraverts who are often geniuses at putting empires of the imagination into action, as in the famed best-of-both-worlds combo of Jobs and Wozniak.

Introversion Is Not a Mental Illness

Perhaps the biggest myth around introversion is that it means someone suffers from shyness, as though it were a medical condition. Introverts aren’t necessarily shy. An introvert may or may not be shy but shyness is more about fear or anxiety, whereas your classic group of introverts would, if given the choice between a peaceful night curled up with a book and a dinner party with strangers, more often opt for the low-key environment. They might even describe their favourite ecosystem as a literal version of the film “A Quiet Place” (the parts where nobody is meant to make any noise, minus the monsters). At the broader cultural level, the distinction between shyness (anxiousness) and introversion (disposition) is not reflected in everyday language. (The people, do thee not love personality science?) The first result in the Oxford Dictionary of English for extravert is “an outgoing, socially confident person” and an introvert is defined as “a shy, reticent person.” Shyness, it’s worth noting, isn’t something permanent. Even Richard Branson, seemingly one of the most naturally gifted networkers and entrepreneurs, has talked openly about the struggle to overcome shyness.

Speaking is Not an Act of Extraversion

(I thieved this sentence from Malcolm Gladwell.) Similar to the issue with not equating introversion with illness, there seems to be a widespread assumption that if someone excels at sales or public speaking — or does either of these things professionally — they must be extraverted. Perhaps the best example is the oft-cited “extravert” Barack Obama. As those with knowledge of how the former U.S. President spends his time have pointed out, he’s actually an introvert — one of the most highly introverted Presidents the office has ever seen. (If your response is “But he can’t be an introvert, he’s such a good speaker!” stop, please, I beseech you, reread the bold sentence I stole.) A couple of other card-carrying introverts who might not appear obvious examples because of their well-developed sales and marketing skillsets are Tim Ferriss and Ryan Holiday, two best-selling authors revitalising stoic philosophy for the masses. I could go on, but the important point here is not to take our intuitions of personality at face value — there’s almost always more to the picture.

History is jam packed with writers, artists, musicians, engineers, scientists, mathematicians, nobel laureates, and titans of industry who prefer the quite space — a space essential to creativity, where sometimes prolonged and extreme periods of isolation have shown to be a necessary cost involved in making great art. I, for one, would like to see more Newtons, Gandhis, Tolkiens, Rowlings, and other artists of the pen and brush and chisel whose efforts elevate all of humanity. But no matter where you sit on the E spectrum, how creative or uncreative you think you are, how little or how much alone time you crave, Susan Cain offers an important reminder: “There’s zero correlation between being the best talker and having the best ideas.”

Bored Panda: 30 Funny Memes That Will Make Every Introvert Laugh Out Loud 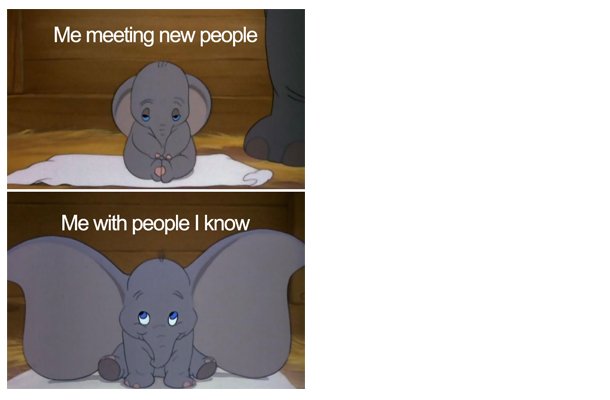 Introvert, Dear: 25 Gorgeous Illustrations That Perfectly Capture The Joy Of Living Alone As An Introvert