The Most Important Mental Models: Getting Started

Human beings are learning machines. Life's primary learning, as well as most progress in science, continues to rely on a fundamental problem solving tool: Trial and Error, the basis of the Scientific Method.

Through trial and error, our knowledge expands. A child's first impression of Flat Earth is later — due to reading, conversation, or perhaps a brilliant Sherlock-esque deduction — upgraded to Sphere Earth, which is close but wrong, and again improved to Oblate Spheroid Earth (catchy, I know).

We call these abstract tools of the mind Mental Models — a small-scale internal representation of how things work outside. Although the science isn't clear, there are plausible reasons for suspecting that the mental model is at the very core, or part of the core process, of human reasoning.

Thus, looking at it another way, human beings are model-making machines.

Mental models are mental software. Like the apps on your smartphone screen, everybody has at their disposal a vast array of mental programs waiting to be tapped in the right situation. A meeting at work might activate Supply and Demand; the onset of stress might prompt a return to Mindfulness; an argument with your spouse might boot up Cost-Benefit Analysis.

Despite our flexible mental software, our models or maps of reality are not reality. (There's even a mental model for this concept: The Map is Not the Territory.) Models are theoretically imperfect but necessary to our practical survival; their main value is in "starting-point thinking" (a platform to move forward), as compared with algorithmic or "rule-based thinking" (if this, do that).

The closer we're able to align our mental maps of the world with the terrain, the more likely we are to make smart judgements — or, in the language of the intellectual ambition currently in vogue, there are those of us simply trying to be less wrong. Myself included.

While fields like science, economics, statistics, psychology, and productivity are filled with thousands of models that would take lifetimes to acquire, the models of highest practical value for operating effectively in the world today are perhaps closer to the original number of Pokémon: around 150, give or take. That’s good news, if you want to be a mental model master.

The sooner you start catching ‘em, the better. The age at which you master critical thinking skills, for instance, can have a profound effect on later learning. Since Critical Thinking is essentially a meta-program for thinking about the validity of other programs, without it, malicious software can slip through undetected and do all kinds of pernicious long-term damage.

In the same sense, working to obtain a competent grasp of the most important mental models is arguably the next smartest investment of any student’s educational time, after equipping with basic literacy and numeracy skills, for the reason that key mental models construct a central wireframe to slice and dice most other concepts. With a robust framework in place, it allows the student to proceed more efficiently not only with real-world decision making, but also with learning itself.

Critical Mental Models are the Batman utility belt of problem solving: the fewest number of items to help you succeed in the widest range of situations.

Seeing as most schools still seem strangely intent on equipping students with low utility items such as Trigonometry and Memorise This Capital City to thrive in the 19th century, you are unlikely to hear about these critical mental models unless you — or someone you know — happens to have a strong interest in self-education. I suppose this has been the deal all along, as one of the fathers of personal development, Jim Rohn, observed many decades ago:

This raises the $64,000 question: what are the critical models?

A number of excellent (and free) online resources exist, both as introductions to the value of mental models in general, in case I haven't convinced you it's a worthwhile educational pursuit, as well as master list references with user-friendly explanations, in case you're a slow learner like myself.

Charlie Munger popularised the concept of building a "latticework of mental models" and nearly all guides on mental models refer back to him. Munger’s famed 1995 talk on The Psychology of Human Misjudgment runs over an hour, so you may like to start with this 15-minute abridged/animated version:

Shane Parrish has created an enormously valuable resource dedicated to helping people master mental models, which includes a main list of 113 models to get going. This site is probably the single best guide to mental models anywhere on the web and well worth bookmarking.

James Clear, who writes some of the best articles on productivity and personal development, has sorted through over 1,000 mental models and compiled the best into a short list, which he continually updates. 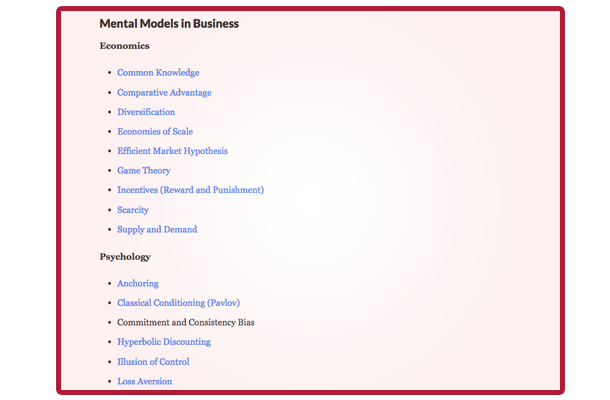 Michael Simmons collected 650+ mental models, which culminated in an infographic called The Top 12 Most Useful and Universal Mental Models. 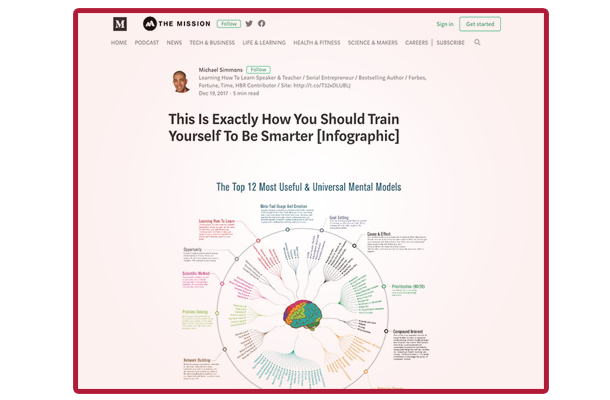 Some models won't apply to your specific situation, and that's okay. I've created a list of 80 useful models to help clarify my thinking as part of my own personal development journey, but my list won't match yours, and that's also okay. Ultimately, all wisdom is personal. As Bruce Lee said: