The 3 Smartest Characters in Game of Thrones

“Fight every battle everywhere, always, in your mind. Everyone is your enemy, everyone is your friend. Every possible series of events is happening all at once. Live that way and nothing will surprise you. Everything that happens will be something that you’ve seen before.” — Petyr Baelish ("Littlefinger"), Season 7, Episode 3

(This was written for key characters still alive at the time of publishing. Spoilers if you're not up to date with Season 7.) 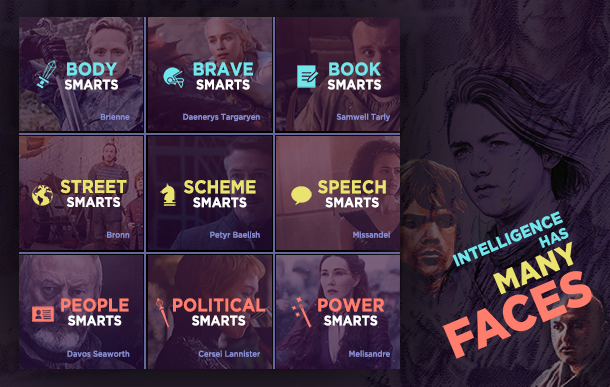 The Three Smartest Characters on Game of Thrones

The main protagonist of the series (according to mathematical network analysis), and George R.R. Martin’s favourite character (according to George R.R. Martin), "The Imp” was originally conceived by Martin as “the ugliest person in the world but the most intelligent, too.” Tyrion understands the game better than almost anybody, which is partly why he was entrusted to serve as Hand of the King and (later) Hand of the Queen. While he’s made mistakes and can lack impulse control (yes, he has a problem with wine and women), his character has matured and, after meeting Daenerys, regained his sense of purpose. Tyrion has political nous, serious book smarts, and lightning fast wit (easily the winner of the Best Quips award). However, a far less appreciated side of Tyrion’s intelligence is his capacity for empathy: the ability to get inside someone’s head and understand what makes that mind tick. It’s a superpower that has saved his life on more than one occasion. To understand why Tyrion is virtually un-killable, I highly recommend this 10-minute video deconstructing his genius use of empathy.

Unlike her more measured sister, Sansa, Arya is temperamental. Even a little anger at the wrong moment can lead to a really dumb decision, and Arya is consumed with vengeance. But rage, properly channeled, can be a powerful motivator to learn and grow (Batman, anyone?). Since the beginning of the series, Arya has used pain and anger to transform herself into a violent little genius. The ability to adapt to one’s surroundings is arguably the highest form of intelligence. Adaptability. This is why Arya is #2 on my list. Somehow, Arya always finds a way to survive impossible situations. What doesn’t kill the girl makes her smarter. She’s got the better of The Hound (one of the strongest characters), won the respect of Tywin Lannister (one of the smartest characters), defeated an older and better-trained assassin, become a master of disguise, infiltrated and terminated the men of House Frey, outclassed Brienne sparring in combat, and, oh yeah, there where those 10 other times she outsmarted everyone. Don’t forget: Arya could be anyone.

Lord Varys, aka "The Spider," is cunning, clever, mysterious, and in my opinion the most dangerous mind in the game. It is no small feat that Varys raised himself from poverty to power, selling secrets as his route to becoming the wealthy and well-informed "Master of Whisperers." If you take his raw intellect, as seen in the quick-witted exchanges with Tyrion, stir in the high-level knowledge accumulated at the royal court, and layer over the life skills acquired at street level, Varys looks formidable. Now inject his spy network and you have a mastermind/master manipulator capable of using his network intelligence to see what others can’t and weave his web from the shadows. Although similar in many ways to Littlefinger—a shrewd, stealthy operator who also thinks several moves ahead and knows that misinformation is power—Varys is generally more careful, more disciplined, and less prone to making errors. Patiently the spider waits.