Dr. Stephen Covey is perhaps the world's most famous management consultant in light of the success of The 7 Habits of Highly Effective People, which was named the #1 Most Influential Business Book of the 20th Century.

Covey had studied the success literature of the last 200 years for his doctoral dissertation and condensed the wisdom into The 7 Habits.

What many people don't know is that he wrote a follow-up: The 8th Habit, published in 2004, which only sold around 400,000 copies. I say "only" because The 7 Habits sold about 15 million, and 400,000 would still be considered a career high for any good novelist.

Habit #8 is: "Find Your Voice and Inspire Others to Find Theirs."

The book is densely packed with interesting stories and diagrams, but there is one page that stands out more than any other:

“If you were to ask me what one subject, one theme, one point, seemed to have the greatest impact upon people – what one great idea resonated deeper in the soul than any other – if you were to ask what one ideal was most practical, most relevant, most timely, regardless of circumstances, I would answer quickly, without any reservation, and with the deepest conviction of my heart and soul, that we are free to choose. This power and freedom stand in stark contrast to the mind-set of victimise and culture of blame so prevalent in society today. Fundamentally, we are a product of choice, not nature (genes) or nurture (upbringing, environment). Certainly genes and culture often influence very powerfully, but they do not determine.”

The observant reader will notice that Covey is actually talking about the foundational pillar of Emotional Intelligence (Self-Awareness).

"I have become deeply convinced that the best, systematic way to develop the 5 dimensions of EQ is through the 7 habits." - Stephen Covey

The 7 Habits Of Emotional Intelligence

Covey goes on to provide the linkages between The 7 Habits and the 5 cores of Emotional Intelligence, which are: 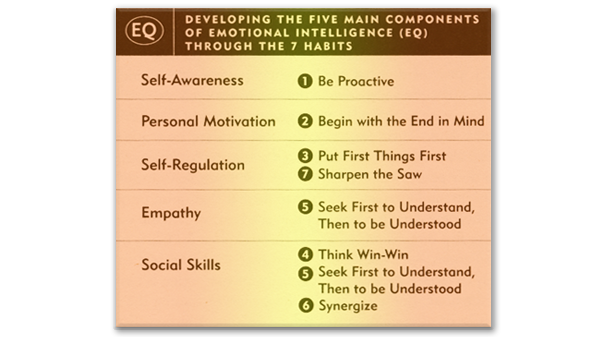 When you think about it, The 7 Habits was a book entirely about developing your Emotional Intelligence and yet it was published in 1989, one year before the word Emotional Intelligence had even been coined and six years before the public first became aware of it. Covey reflects on this, and talks about the transcending importance of EQ in contrast to the fact that there is relatively little out there on how it can be developed. His books and his life, in retrospect, have been a journey to help do just that. I can think of few endeavours that are more worthwhile.