Just as the scientific method is one of the most prominent tools associated with science, the Socratic method is one of the foremost tools associated with critical thinking. This article is part of the Smarter Thinking Series, which includes a range of mental models and tools to improve general decision making, business acumen, and critical thinking.

The technique is named after Socrates (469-399 BC), one of the most influential philosophers in history, who lived in ancient Athens, Greece. There are no known writings produced by Socrates. Most of what we know about his life comes from Plato, a student of Socrates, who wrote a series of “dialogues” featuring his teacher (although Socrates did not consider himself a “teacher” in the formal sense).

As told in Plato’s Apology, we learn that the Oracle of Delphi has confirmed to a friend of Socrates that no man is wiser than Socrates. Disturbed after hearing this news, Socrates sets out on a journey to understand how this could be, since he does not consider himself to be wise whatsoever. The philosopher travels around the city, seeking out respected Athenians — including politicians, poets, and artisans — who he suspects are wise about moral matters, such as the nature of virtue, courage, or justice. However, when the experts’ beliefs are cross-examined under his inquisitive, skilful, and persistent questioning style, he finds they are unwilling to admit that they do not really know what they suppose. What makes him wiser than others, Socrates concludes, is his willingness to acknowledge the true extent of his own ignorance. Socrates’ spate of dialogues eventually leads to him being charged with corrupting the minds of the youth and “impiety,” which famously results in Socrates committing suicide by drinking hemlock, despite having the apparent opportunity to escape his death sentence with the help of friends.

Even though its roots are some 2,500 years old, and other problem solving, coaching, and questioning techniques have since arrived on the scene (e.g., Root Cause Analysis, 5 Whys, GROW, 6 Thinking Hats), the Socratic method still remains an extremely popular mental model. It is widely used by teachers, law professors, facilitators, consultants, coaches, and therapists.

Gregory Vlastos, one of the 20th century’s most influential scholars on ancient philosophy, regarded the Socratic method as among the greatest achievements of humanity.

The Socratic method is variously defined as a “pedagogical technique,” “a teaching style,” “a form of cooperative argumentative dialogue,” “a form of dialogic discussion,” “a form of inquiry and debate,” “a method of inquiry and instruction,” and “a disciplined form of questioning.” There is no “official” version of the method, universal definition, or universally accepted structure, framework, methodology, step-by-step process, or standardised set of questions.

The Socratic method is used in a variety of ways and with a variety of aims. In its loosest sense, the Socratic method has come to mean almost any teaching method involving question and answer, in contrast to teaching in the form of lecture (Scott, 2004). There is a long history of academic debate over whether Socrates really has a method, or whether he has a number of methods, and — if he only has one — what elements are most characteristic. Scholars and historians who have closely examined Plato’s dialogues see a wide range of discrepancies in how Socrates engages in conversation, and find it very difficult to regard Socrates as having any single uniform approach, even at a very broad level. The influential work of Gregory Vlastos advanced the idea that Socrates has a method, which Vlastos dubbed “the Socratic elenchus,” however this view has been disputed by many accounts.

The Socratic method, according to one prominent view, is a method of hypothesis elimination. The questioner is presented with an assertion or hypothesis by an interlocutor. The questioner proceeds to cross-examine the hypothesis by a persistent and targeted line of questioning, with a view to exposing a contradiction or weakness. If a weakness is discovered, the hypothesis may be eliminated. After discarding a faulty hypothesis, a new or reformulated hypothesis may be suggested, and the process repeated. The Socratic method, in this sense, is less a model for problem solving than it is a model for critical thinking, diagnostically probing intuitions, assumptions, or beliefs, and testing their validity. A considerate, non-judgmental, non-confrontational attitude is often seen as an important part of the process. Other key features of the method that have been proposed include an emphasis on intellectual humility, uncertainty, cooperation, curiosity, and shared learning. Socratic questioning is most often used between two or more people, but it may also be used on one’s own.

3 Major Versions of the Socratic Method

Although Socrates does not appear to have a consistent or unified method that is apparent throughout Plato’s writings, he would often start a dialogue by professing his ignorance on a philosophical subject (e.g., “What is courage?”) and request someone to propose true knowledge (e.g., “Courage is endurance of the soul”). Socrates would then reveal flaws in a given definition or claim, usually by providing a counterexample or competing definition, and — after inducing much confusion and perplexity (a mental state known to the Greeks as “aporia”) — people would be forced to confront their own ignorance.

Some of the distinctive characteristics of the “classic” Socratic method are:

The “modern” Socratic method is most often associated with teaching in the context of primary and secondary school, whereby the teacher has a curriculum or “knowledge agenda” and uses a series of probing and leading questions to draw out thoughts from the student in order to guide the student to the correct answer, or simply help him/her see things in a different light. The “modern” method is so named, not because it is recent in invention, but because of its prominence in modern education (Maxwell, 2015). Socrates’ “switch” to this method can be seen in the dialogue Meno, in which he helps a slave boy calculate the lengths and area of a square.

Some of the distinctive characteristics of the “modern” Socratic method are:

The “Socratic method” has been called a “defining element of American legal education.” According to a 1996 survey, the method was used by 97% of law professors with their first-year classes, although more recent accounts suggest a decline in its use and popularity. The term “Socratic method,” when it appears in the context of legal education, is not necessarily indicative of the descriptions given so far. Elements of Socratic teaching are often combined with the “case method” (as made famous by Harvard). Law students in many U.S. universities are required to read up on case summaries prior to attending class. Once in session, the professor may “cold call” (pick a student at random) and begin grilling the student on the details of the case, testing his/her responses from a number of angles. The intimidation, fear, and stress created through the use of this technique (like that seen in the 1973 film The Paper Chase) has been the subject of much criticism, and its emphasis on superficial fact checking rather than shared inquiry has led some to dispute whether this version of the method is truly “Socratic.”

One way of depicting the modern Socratic method is shown below. 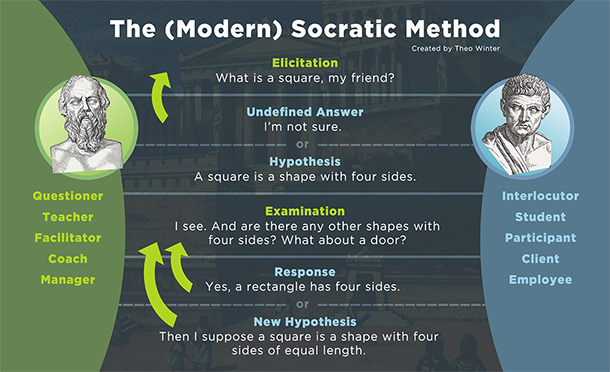 Note: The model above is intended as general guide for understanding, and is not a strict prescriptive process.

Richard Paul (1993) outlines six types of Socratic questions, which are often cited as a teaching resource.

6. Questions About the Question

Adapted from Richard Paul, Critical Thinking: How to Prepare Students for a Rapidly Changing World, 1993.

Benefits, Advantages and Strengths of the Socratic Method

Some of the commonly cited benefits of the Socratic method include:


Criticisms, Limitations and Weaknesses of the Socratic Method

Some of the commonly cited criticisms of the Socratic method include: