See How You Rank Compared to 100 Billion Humans

You are a god. Yes, you, reading this. You are a god, who, in all likelihood, looks in the mirror each day and sees the reflection of a pitifully ordinary creature. Your mirror is a good-for-nothing liar.

The reality is you possess unfathomable beauty, wealth, and power.

Okay. So here’s the thing: life sucks. We all know this. You switch on your TV and what do you see? Trump. Brexit. Terrorism. Madness — a world gone utterly mad. One survey found only 3% of Australians, 4% of Brits, and 6% of Americans felt that, all things considered, the world was getting better.

Truly, these are the worst of times.

These are the best of times, and yet somehow, inexplicably, nearly everybody thinks otherwise.

Note: This post is a lot longer than usual because I wanted to pull together some ideas that I can't stop thinking about; ideas that have fundamentally changed how I see everything. I've tried to balance hard data with light entertainment, but if your time is short, feel free to skim just the bolded parts.

While I confess that some part of me — let's call him History Romantic Theo — loves the idea of swapping out the present for Victorian era England or ancient Egypt, the truth is that the farther back in time we travel, the uglier life gets. (Think Game of Thrones, not Pride and Prejudice.)

For most humans who have ever roamed Earth’s surface — around 100 billion — life was no picnic outing.

Don't get me wrong, there are still many significant problems in the world today, but if we were to take the daily news cycle with its hyper-negative, “if it bleeds, it leads” bias, and instead ran only 1 news bulletin every 10 years, then — alongside the major tragedies — we would also, perhaps for the first time in our lives, be exposed to the stunningly positive full-picture truth. 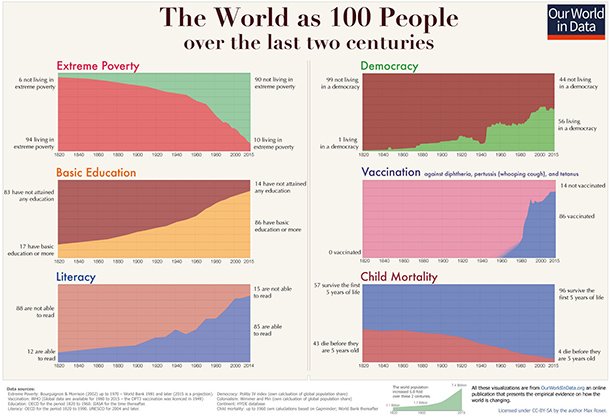 Have you ever seen digits and lines so exquisite?

Those who are intellectually curious can find hundreds of such graphs online, graphs revealing evidence of astonishing increases in human welfare over decades and centuries, some the most notable of which are housed in Steven Pinker’s Enlightenment Now (2018). At 70+ graphs and 500+ pages, I could dedicate several posts to the statistics in Pinker's book, so here are just a few favourites:

The Most Important Event in Human History Fasten your seatbelt, Dorothy, because these are 2 of the greatest line graphs ever made: 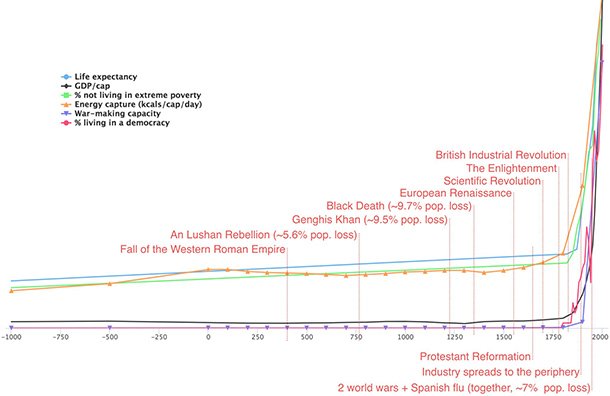 The above beauty is part of a speculative post on the primary driver of the massive rise in welfare starting around 1800-1870, whereby the author effectively sums up human history in one sentence:

And then there’s this jaw dropper:

Stop and think about that for a moment: nearly every human being who has ever lived suffered poverty — and now it’s a diminishing minority. (Good news if you believe in reincarnation.)

The vast majority will never know the level of the wealth and luxury you enjoy. You have it better than individuals who were once worshipped as living gods: Alexander the Great, Caesar, Chinese and Japanese Emperors, Cleopatra and the Pharaohs of Egypt.

History Romantic Theo only thinks he wants to trade places with the pharaoh. Don't kid yourself, buddy. Bronze-age ignorance, sanitation, and life expectancy are no match for modern-day plumbing, computers, and Subway cookies. (Or whatever your fast-food fetish.)

God or Peasant: It's About What You See

In theory, these revelations should be life transforming.

In practice, they're probably not.

The problem is that human happiness is contingent to a large extent on immediate social comparison: how does my life compare to the Joneses? To the Kardashians? To peers? To my wife’s sister’s husband?

A little perspective can help.

Can you imagine how insane it would look to the ancient Greeks to see 21st-century humans feeling miserable about life because they're not Kim or Kanye? It would be like Athena and Apollo hating themselves because of the existence of Aphrodite and Zeus. Gods jealous of gods.

You possess omnipotence: the god-like power to harness lightning bolts; the magic of electricity, running water, and all human knowledge at the flick of a switch; the ability to fly through clouds and capture perfect images of remote wonders; the freedom to shape your own career and destiny, while being endowed with human rights that shield you from slavery and tyranny — powers that millions died for.

You possess omniscience: the god-like power of seeing across time and civilisation. Think of the questions that consumed the lives of genius, unknown truths that for Plato and Newton were beyond fortune; they were life itself. Earth orbiting the sun. The Periodic table. The age of the universe. Evolution. Germ theory. DNA. Relativity. You have been born with immeasurable riches — wealth that millions died for.

So here you are, given everything, born in the Age of Gods...

You have the knowledge of a god.

Technology gives you the power of a god.

Compared to most people alive today, you live as a god.

Compared to 99% of all humans who ever lived, you are a god.

Compared to ALL other species of animal on this planet, you are a god.

Compared to the living gods of history, you are a god who walks above gods.

Now, look in the mirror and tell me what you see.