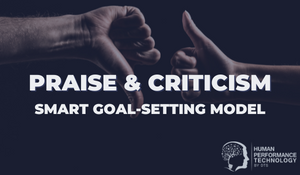 This article is an extension to our "In a Nutshell" series. To read our original overview of the SMART goal-setting model click here.

The SMART goal-setting model is generally well liked for encompassing the key aspects of goal setting in an easy-to-remember acronym. The model is simple, useful, flexible and widely known, which are its main strengths.

Another strength of the SMART model is its ability to integrate with other models. For example, many use the SMART model in the very first step of the GROW Coaching Model since the "G" in GROW stands for goal. Well-designed strategic measures used in the Balanced Scorecard should take into account all the SMART elements. Daniel Pink's Autonomy, Mastery, Purpose Model helps people understand the importance of developing goals that are dependant on intrinsic motivation, not just external rewards. (This discussion can be had as part of the “Relevant” step.)

Setting business targets and motivating employees to achieve targets are fundamental aspects of organisational life. The SMART approach represents a user-friendly, time tested and popular approach to help structure goals, put in place mechanisms to support their attainment, and eliminate needless confusion around what is expected.

In general, goal setting is well supported from a research perspective. In Enhancing the Benefits and Overcoming the Pitfalls of Goal Setting the authors state:

“… more than 1,000 studies conducted by behavioural scientists on more than 88 different tasks, involving more than 40,000 male and female participants in Asia, Australia, Europe and North America, show that specific high goals are effective in significantly increasing a person’s performance – regardless of the method by which they are set. Assigned goals by a manager, for example, are as effective as self-set of anticipatively set goals if they are accompanied by logic or a rationale from a manager” (Lock and Latham, 2006).

Specific elements of the SMART framework have been supported by wide ranging empirical research. One of the earliest researchers to establish a correlation between clearly identified goals and performance was Edwin Locke, known as the father of modern goal setting theory. One of the major findings to emerge from his extensive research base supports two key aspects of the SMART model: “Results from a review of laboratory and field studies on the effects of goal setting on performance show that in 90% of the studies, specific and challenging goals led to higher performance than easy goals, ‘do your best’ goals, or no goals” (Locke et al., 1981).

Locke, who began his research on goal-setting in the 1960s, has since worked closely with Dr. Gary Latham. Together they identified five principles of effective goal setting: Clarity; Challenge; Commitment; Feedback; Task complexity. Numerous descriptions around how to get the most out of the SMART framework overlap with these elements.

For example, many SMART descriptions stress the importance of creating a sense of progress in order to drive commitment. By "cascading" a big SMART goal into a set of smaller SMART goals or "smarties" this can help make the process more manageable and motivating. Like a trail of candy, smarties should be spaced out at regular intervals that are always within sight and provide a quick "hit" of achievement. When a goal is too big it can be overwhelming and that means people will often procrastinate and struggle to get started.

The importance of cultivating a sense of progress in daily work is stressed by Teresa Amabile in The Progress Principle: Using Small Wins to Ignite Joy, Engagement, and Creativity at Work. Amabile’s research into nearly 12,000 daily diary entries from over 200 professionals in 7 companies and 3 different industries came to the following conclusion:

“… of all the positive events that influence inner work life, the single most powerful is progress in meaningful work; of all the negative events, the single most powerful is the opposite of progress—setbacks in the work. We consider this to be a fundamental management principle: facilitating progress is the most effective way for managers to influence inner work life. Even when progress happens in small steps, a person’s sense of steady forward movement toward an important goal can make all the difference between a great day and a terrible one”.

The importance of designing small wins into the goal-setting process is also supported by the goal gradient effect. This motivational principle, which emerged from behavioural science research in the 1930s, says that people and animals will accelerate their efforts the closer they get to a reward. For example, rats run faster as they near the end of a maze, and humans will purchase more coffee the closer they get to receiving a free coffee on a loyalty voucher. While the idea of offering continuous rewards to influence behaviour has been around for many decades, the application of this idea on humans is almost certainly best demonstrated by the publishers working in the video game industry.

Gaming principles, part of the rise in “gamification” that organisations are increasingly embracing, is discussed in The Game Changer (2014). Its author, Dr. Jason Fox, explains: “The reason games work is not because they are games; it’s because the goals, rules and feedback—the elements of all games and work—are well designed. A good game is a goal-driven, challenge-intense and feedback-rich experience”. When goal setters incorporate these elements—clearly defined outcomes, challenge, continuous feedback and rewards—into their approach, both empirical evidence and common sense tell us these individuals are more likely to succeed. The SMART goal-setting model, in its many forms, will likely continue to be the best basic starting point for designing intelligent and motivating goals.

The most obvious criticism of SMART concerns the lack of standard definitions arising from absence of author ownership. The degree of variation and distinction that is used among authors is substantial. There doesn’t appear to be any one version that is significantly more popular than others. This can lead to confusion when two individuals have received training of slightly different models and are unaware of the degree of interpretation that exists.

People may also feel that they need to have a detailed description for each step and can get stuck trying to provide the “correct” answer. SMART might actually become an impediment to making progress if people see the goal-setting process as laborious and time-consuming. If the purpose of goal-setting is to make people more motivated and committed to the process of goal achievement, then being asked to provide a detailed SMART analysis could be counter productive. People may begin to see it as boring “paperwork” and avoid the process altogether.

The SMART model has often been criticised for not taking into account conflicting goals such as organisational, environmental and ethical perspectives. For example, if the performance of a customer service agent is measured in terms of number of customers served, the agent may deliberately shorten conversations at the expense of customer satisfaction in order to meet their prescribed target. In many SMART models, there is no accounting of the cause-and-effect relationship between the goal and its wider impact like in the Balanced Scorecard. In addition to this, SMART descriptions often fail to mention any evaluation step (for example, when a goal is no longer desirable or circumstances shift). For the above reasons, some have suggested the model should be changed to SMARTER (E – Ethical / R – Re-evaluate).

Surprisingly there is even research suggesting that publicly announcing your goals makes you less likely to succeed. In a TED Talk with more than 3 million views, Derek Silvers says “repeated psychology test have proven that telling someone your goal makes it less likely to happen”. Silvers refers to the work of Gollwitzer et al. who ran four separate experiments and concluded: “When other people take notice of one’s identity-relevant behavioural intentions, one’s performance of the intended behaviours is compromised”. (For more on this, refer to the 2009 research article When Intentions Go Public by Gollwitzer, Sheeran, Michalski, and Seifert.)

Furthermore, author Aubrey Daniels lists stretch goals as the number 2 mistake in Oops! 13 Management Practices That Waste Time And Money (2009). Daniels notes that while a large amount of anecdotal evidence suggests that stretch goals work, anecdotal evidence is also the main endorsement for many ineffective products, therapies, and interventions. Among other evidence, Daniels cites research from Fisher et. al (2003) and Chow et al. (2001) who found that employees who repeatedly experienced failure in their attempts to achieve assigned goals had their performance decrease over time.

Lock and Latham list more than half a dozen common pitfalls of goal setting. These include: giving people a difficult goal can be less effective than telling someone to do their best when people lack the competence to attain the goal; setting a goal as a threat rather than a challenge (e.g., “find the answer to 12 or more of these 15 issues” is better than “don’t mess up on more than 3 of these 15 problems”); goal setters sabotage one another when goals conflict (e.g., competing MBA and law students will rip key pages from a journal article and feed their peers false information); when goals are reached or exceeded management then sets impossible goals; goal setters become more conservative when failure to meet a high goal is punished; goal setters become over-confident in past strategies; and goal setters become stressed by having too many goals (Lock and Latham, 2006).