We think there is merit in using pre-screening tasks, just so long as they are able to 'test' the skills or attributes that are known to be important (to the job and/or the company culture) and it doesn’t ask for an unreasonable amount of work up-front.

Back in 2008, Atlassian (the award winning Australian software company) went about a recruitment drive for 20 software developers. The HR folks knew that when they put up the ads for 20 developers they were going to be flooded with thousands of applications, so they needed to come up with an effective way of sifting out the junk from the gold.

Their solution was to add an extra step at the start of the recruitment process.

Instead of calling applicants for a technical phone screen right away, they devised a series of simple ‘coding tasks’ that would take about 2 hours to complete. When the ads went up and the resume downpour started (over 1000 arrived within 2 months) they found that once they sent the coding tasks 30% didn't even bother submitting back answers.

You might think, “Two hours to complete a job application! They’re potentially putting off hundreds of good candidates. Insanity!”

First, Atlassian are like Google — people will step over their grandmother to get a job there. They can afford to be picky. Second, their pre-screening method significantly reduced the number of applications which saved their HR team countless hours of wading through resumes. And third (and most importantly), their pre-screening tasks were specially designed to test job-related skills that could be ranked and graded according to Atlassian’s standards.

Atlassian are a great case study if you work in a company with a strong brand faced with the challenge of high volume applications. But what about smaller companies? Can they really afford to ask applicants to spend 2 hours completing job simulations without even meeting them first?

Here are a few creative examples of job advertisements from smaller companies that are clever ways to pre-screen candidates.

A simple yet effective job ad that tests basic grammatical skill, and also leaves the way the feedback is delivered up to the imagination of the designer. 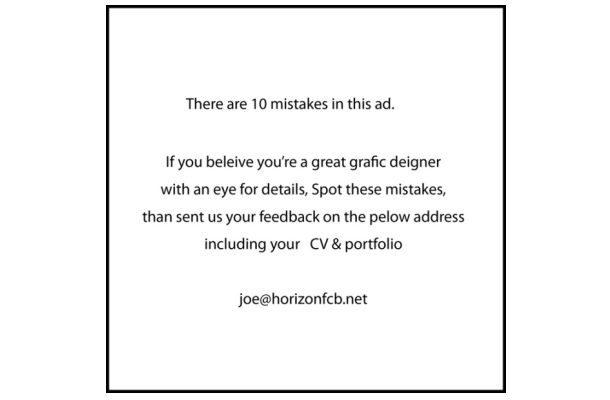 This one takes a little time. In our office the person who was able to work it out the quickest (Trevor) was the only one of us with bar-tending experience! We've listed the answer down below. 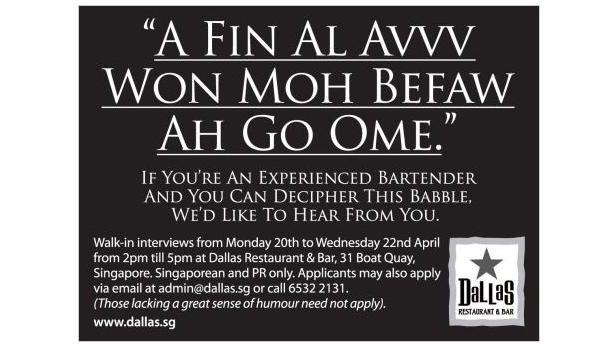 “Obama Stole Our Writer” by Poke (a digital advertising agency) tells the tale of how their newest copywriter had been snapped up by the clutches of President Obama, so they have a position to fill.

It’s hard to make any general rules about the ‘best’ way for companies to pre-screen candidates. We think there is merit in using pre-screening tasks, just so long as they are able to 'test' the skills or attributes that are known to be important (to the job and/or the company culture) and it doesn’t ask for an unreasonable amount of work up-front.

We hope you enjoyed these examples!

*Answer, Bartenders Decipher this Babble: "I Think I'll Have One More Before I Go Home."

What is TriMetrix EQ® and the “Multi-Science” Approach