“Lying will never be the same again” is the auspicious conclusion of a recent TED Talk. Its presenter, Kang Lee, introduces a new facial reading technology in the early stages of development that allows researchers to predict lies with a high level of accuracy.Lee is a developmental researcher who works with children. Though it sounds somewhat counter-intuitive, lying convincingly at a young age is an indicator of healthy development. Conversely, kids who have developmental problems tend to be poor liars. In order to lie, you need 2 core abilities:

At the age of two, around 30% of children can lie convincingly, and this number increases to 80% by the age of four. From this research Lee came to develop Transdermal Optical Imaging (TOI), which promises to have many business applications, including market research. 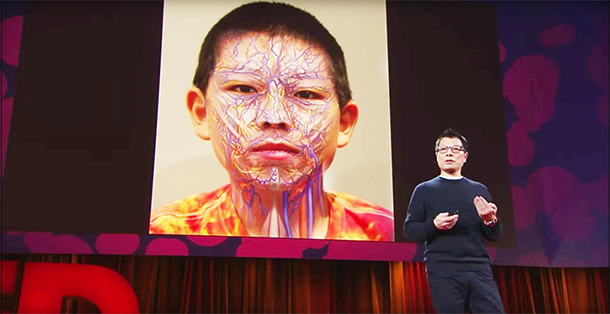 TOI detects hidden emotions by looking at changes in blood flow beneath the skin’s surface. When we experience different emotional states, changes occur in the rich network of blood vessels on our face, which are too subtle to be detected by the naked eye. A common hallmark of lying is that blood flow around the nose increases, while blood flow around the cheeks decreases. This response has been dubbed the Pinocchio effect. While the average adult has an accuracy rate on par with coin flipping (50%) when it comes to guessing if a child is lying, TOI has an alarmingly high success rate of 85%.

Marzio Pozzuoli, CEO of NuraLogix (the company that owns the patent on TOI) is optimistic about the expanding capabilities of emotion-reading devices: “In the very near future, our technology will enable machines to understand how humans are feeling more accurately than any human being can today.”

Watch the 13-minute TED Talk below.