In a Nutshell: Wheel of Emotions

Robert Plutchik (1927 – 2006) was an American psychologist and professor who received his Ph.D. from Columbia University and was professor emeritus at the Albert Einstein College of Medicine. Plutchik published numerous books on the subject of emotion and authored or co-authored more than 265 articles.

Plutchik begins a 2001 article in American Scientist magazine by underscoring the fragmentary and complex state of affairs in his field of expertise: “Almost everyone agrees that the study of emotion is one of the most confused (and still open) chapters in the history of psychology.” Plutchik goes on to add that throughout the course of philosophy and psychology, dozens of definitions of emotion have been proposed and the body of literature on the subject is extensive, dating back thousands of years.

Among the many competing and complementary perspectives, 20th-century psychoanalysts drew attention to the importance of the inner world and subconscious forces, while behaviourists focused on the role of external stimuli and environmental conditioning. In addition to the influential Freudian psychodynamic tradition, Jungian analytical psychology, and Skinner’s behaviourism, other important intellectual traditions and schools of thought developed, including Psychophysiological (associated with William James), Neurological (associated with Walter B. Cannon), and Evolutionary (associated with Charles Darwin). The latter approach, commonly known as the Darwinian view, is the one that most strongly influenced Plutchik’s thinking on emotion and is essential to understanding his modelling approach.

According to Plutchik, human emotions are best understood through an evolutionary lens, which can explain why emotions exist in animals in the ways they do in the first place and how emotions play a crucial role in shaping behaviour. By linking emotions to adaptive behaviour, Plutchik found he was able to unify a number of theoretical perspectives and bring a certain degree of order to a subject area fraught with theoretical, linguistic, and measurement problems.

Though ongoing debate remains, there is general agreement that emotions can be grouped together into “families” based on similarity, and that certain emotions are primary. Stated differently, there are many words in the English language to describe the same emotional state at different levels of intensity (e.g., anger and rage are similar in type, and rage is more intense than anger). According to Plutchik, a long line of experts and researchers have proposed anywhere from 3 to 11 basic emotions: all have included fear, anger, and sadness; most have included joy, love, and surprise.

“An emotion may be defined as a patterned bodily reaction of either destruction, reproduction, incorporation, orientation, protection, reintegration, rejection or exploration or some combination of these, which is brought about by a stimulus.” (Plutchik, 1962)

By this way of thinking, all the words to describe emotions are seen as serving one of these primary adaptive functions or a blend of these functions, which evolved to enable the organism or the species to survive. Each of these functions is associated with 8 primary emotions, represented by Plutchik in his wheel of emotions — the model for which he is best known and remembered. The basic form of Plutchik's wheel of emotions or circumplex model, part of his Psychoevolutionary Theory of Emotion, was proposed in 1958. Despite the appearance that all emotions are perfectly reducible to 8 basic bipolar units, Plutchik is not definitive in the relationships assumed in his model, noting that the “arrangement around the emotion-circle is still tentative, depending for confirmation upon various kinds of studies of similarity of emotions.”

Plutchik conceptualised the structural part of his emotion theory using a model similar to a colour wheel, where emotions are grouped together based on likeness and opposites are located 180 degrees apart. The colour wheel analogy is particularly useful in connection with emotions, since emotions, like colours, are not easily compartmentalised or neatly separated into categories with clear-cut divisions between where one ends and the next begins, but shade into one another along a spectrum and can be mixed to produce countless variations. Plutchik was not the first to link emotions to a colour wheel and traces the development of the first circumplex model to 1941 with psychologist Harold Schlosberg.

Part of Robert Plutchik’s Psychoevolutionary Theory of Emotions, the Plutchik Wheel of Emotions is usually represented as a multidimensional model (visualised as a three-dimensional cone-shaped object, similar to an orange cut in half) or the more common circumplex model (imagined as a two-dimensional circle, wheel, or lotus flower). Both the wheel and the cone model represent the same information: the wheel shows how the cone would look as a flattened object. The main aspects relevant to understanding Plutchik’s model are outlined below. 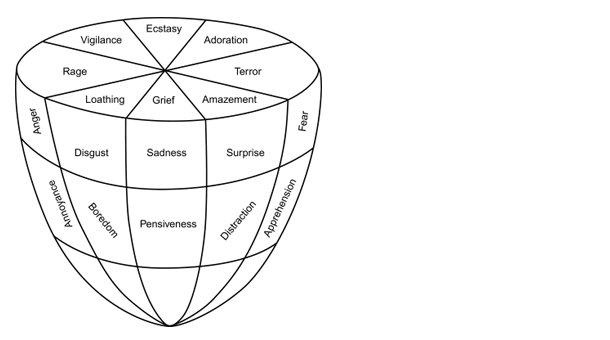 The multidimensional or cone model 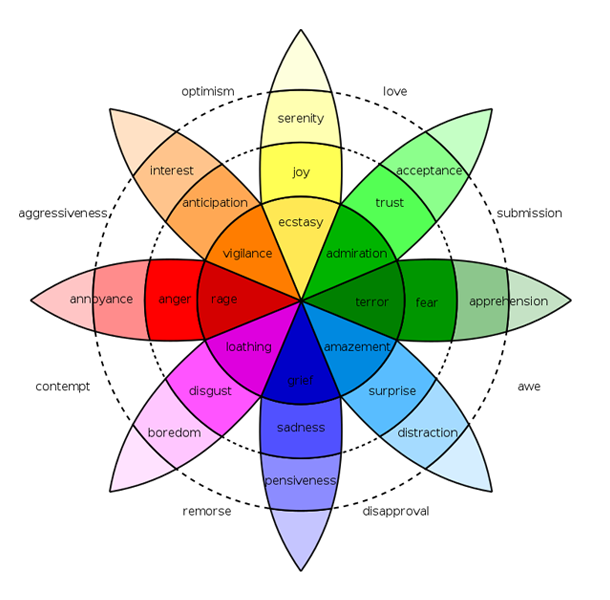 The wheel or circumplex model

Primary emotions: there are eight basic sectors of the wheel arranged by similarity.

Opposites: each primary emotion has its opposite situated 180 degrees apart.

Primary dyads: each pair of adjacent primary emotions can be blended to produce a distinct combination emotion or “dyad” (i.e., a mixture of two emotions). The combination emotions do not generally have a specific colour assigned or they are associated with grey.

Adaptive functions: though it is not commonly included in the circumplex, the core insight of Plutchik’s framework is that each of the basic emotions serve, or developed to serve, a specific function, goal, or purpose based on our evolutionary development.

“In 1962, I presented a psychoevolutionary theory of emotions that was based on the assumption that there are 8 basic emotion dimensions and that all the emotions described in our languages are either one of these eight or a compound or blend of them. The basic emotions were conceptualised as being related to one another by means of a circle or circumplex, somewhat like the relations among colours. The basic dimensions were defined within an adaptive, evolutionary framework as general bipolar dimensions of destruction (anger, rage) and protection (fear, panic), incorporation (acceptance, trust) and rejection (disgust, revulsion), reproduction (joy, elation) and reintegration (sadness, grief), and exploration (interest, expectation) and orientation (surprise, astonishment). I assumed that emotions exist in all animals and that the different forms of expressions of emotions in different animal groups reflected the operation of evolutionary forces acting on the same fundamental survival mechanisms.”