In a Nutshell: The Johari Window

The term "Johari Window" is derived from the first names of its creators: Joseph Luft and Harry Ingham. The model was first developed in 1955 and published in the Proceedings of the Western Training Laboratory in Group Development later that year.In the 1950s, Luft and Ingham were asked to present at a conference in California and outlined their four-quadrant model of interpersonal relationships that focused on the degree to which people are aware of information about themselves and others, divided into four boxes.

Luft discovered later that people wanted him to explain more about the “Joe-Harry Window”—the name people were using to refer to the four-box model. Apparently, some of the participants at the California conference found the model to be valuable and had begun using it in their own training sessions. The informal authorship was soon shortened to “Johari Window”.

Over the years, different variations of terminology evolved to describe each of the four sections; however, the basic idea behind the model is very simple.

Overview:The Johari Window is primarily used as a team building exercise to improve self-awareness, trust and communication within a team. It achieves these goals by exploring information about each team member from four perspectives: 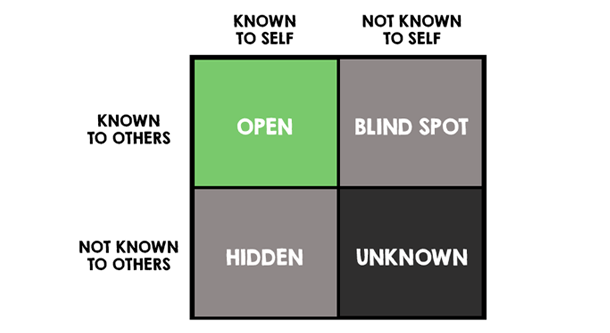 In one of the more popular descriptions of the model, participants are provided with a list of 56 adjectives including terms like bold, accepting, calm, caring, friendly, intelligent, nervous, trustworthy, etc. Each individual is asked to select half a dozen words that describe him/her, and then the same number that would best describe each of their fellow participants.

The Johari Window is often initially represented with four equal-sized boxes; however, these boxes should not be imagined as being static. Like shifting walls in a house, the rooms will expand and contract in size, in proportion to the flow of information within the group. For example, when a new team comes together for the first time, the “open area” and “blind area” will both be smaller in size than the “hidden area” and “unknown area”, since team members know very little about each other at this early stage. As team members learn more about one another (background, education, skills, beliefs, values, behavioural tendencies, etc.) through self-disclosure, sharing, observation, soliciting feedback and self-discovery, the “open area” will gradually expand and take up the most room in the diagram.

In fact, this is the explicit goal of the model: to move a team toward the “open area”. When people work together in an environment where they have a clear understanding of each other’s strengths and weaknesses (as well as their own), it is generally more conducive to trust and productivity in the workplace, which is the ultimate goal of the Johari Window exercise.