In a Nutshell: Gallup Q12

Gallup is a US-based organisation known around the world for its public opinion polling information and large-scale collection of business performance data. Gallup is also known for its research into the foundational elements of employee engagement that predict performance.

In the 1999 book, “First, Break All the Rules,” two Gallup researchers, Marcus Buckingham and Curt Coffman, published the company’s research findings involving thousands of employee opinion surveys that were collected from a wide range of industries over a 25-year period. The book remains one of the most influential business management and HR titles of all time. The authors introduced the general public to the Gallup Q12 for the first time: 12 simple questions that were tied directly to a range of performance outcomes and could be used as a basic framework by any manager to improve business results in their workplace.

Gallup has now studied over 100,000+ teams - over 2.7 million workers worldwide - to understand what employees need most to perform at their best.1 (The Q12 diagnostic tool is a result of that research.) They highlighted the fact that a team’s direct manager was found to be the single most important variable affecting a team’s overall performance since managers directly control so many of the elements within employees’ lives. It is from this research that the popular business catchphrase, “People leave managers, not companies,” was coined.

The Gallup Q12 is a list comprised of 12 questions that have been found, by means of a large-scale meta-analysis conducted by Gallup, to have the most significant impact on a team’s level of engagement and performance. 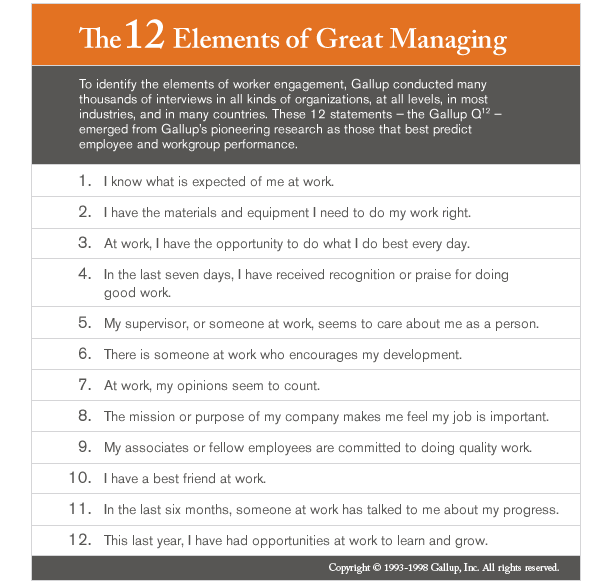 According to Buckingham and Coffman, “these twelve questions are the simplest and most accurate way to measure the strength of a workplace.” The Q12 is also described by Gallup as “The 12 Elements of Great Managing.” The Q12 are found to correlate with four key business outcomes: productivity, profit, retention and customer satisfaction.

The development of the Q12 is explained in detail in appendices of "First, Break All the Rules.” In brief, the researchers relied on a statistical technique called meta-analysis that was applied to data comprising over 100,000 employees and around 2,500 business units. The researchers found that employees, who responded more positively to the 12 questions, also worked in business units with much higher levels of productivity, profit, retention and customer satisfaction.