The five-factor model (FFM), or more commonly known as the “Big Five” theory of personality, does not have a single, identifiable inventor. Instead, there are several independent sets of researchers that were involved in the development and clarification of the Big Five dimensions over several decades.

The evolution of the theory surrounding the origins of the Big Five is very extensive and complex, which we do not have room to cover here. In brief, we know that Ernest Tupes and Raymond Christal are recognised for positing an initial version of the five-factor model in 1961 that most closely resembles the descriptions currently in use. (They named their factors Surgency, Agreeableness, Dependability, Emotional Stability, Culture.) Many consider this to be the first emergence of the Big Five, however, this remains a subject open to debate. Some of the other key figures in this area include Louis Thurstone, Raymond Cattell, Hans Eysenck, Gordon Allport, Henry Odbert, Donald Fiske, Warren Norman, Lewis Goldberg, Paul Costa, and Robert McCrae.

The term "Big Five" was itself coined in the early 1980s by Lewis Goldberg who was a central figure in bringing other researchers’ attention to the concept. The title was chosen, not to reflect the perceived importance or greatness of the selected five factors, but to emphasise that each of the factors is extremely broad.

What is unique about the five-factor model from other personality theories is that it is not a theory belonging to any one individual. The theory was repeatedly rediscovered and reconfirmed by independent researchers through an evidence-based process called “factor analysis.” As part of this process, hundreds of people were given surveys containing lists of terms from the English language that described various personality characteristics. Researchers found that people who ticked a particular term like “outgoing” to describe themselves usually also selected terms such as “social,” “gregarious,” “lively,” “talkative” and other similar words. These terms have all been found to group together statistically into the factor known as “extraversion.” (What Tupes and Christal referred to as Surgency.) Statistics are then used to uncover the factors or categories to which the adjectives seem to belong. This is the method known as factor analysis.

There are a number of different personality tests and ways of representing the Big Five (i.e. there is no one official explanation that is universally used). Probably the most well-known personality inventory based on the Big Five theory is Costa and McCrae’s NEO-PI-R (Neuroticism, Extraversion, Openness Personality Inventory Revised).

The “Big Five” is the most well-known and academically accepted model of personality in psychology. These five overarching domains have been found to incorporate most (though not all) of the known personality traits and can therefore be viewed as representing the most basic grouping of human personality traits. 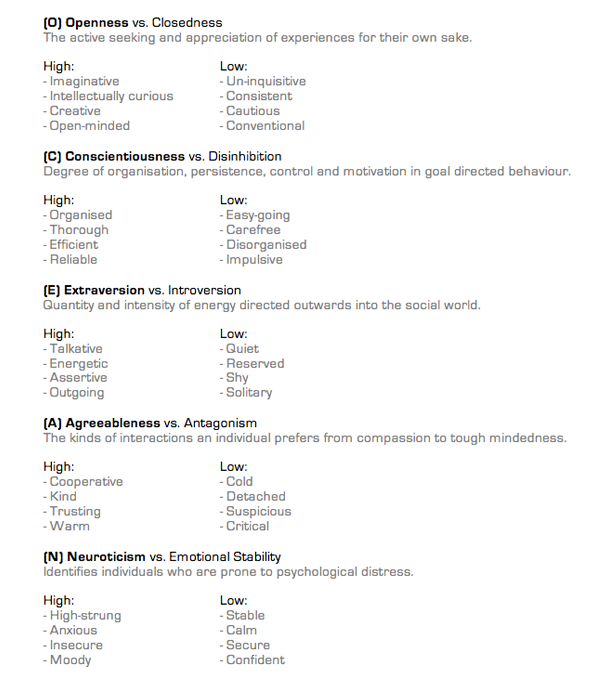 These five basic factors exist as dimensions, not ”either/or” types. People fall somewhere along a continuum, with most people falling in the middle rather than at the extremes.

It is also important to remember that the model incorporates more than the traits listed above, but does not encompass every personality trait. As noted by John and Srivastava: “Thus, the Big Five structure does not imply that personality differences can be reduced to only five traits. Rather, these five dimension represent personality at the broadest level of abstraction, and each dimension summarises a large number of distinct, more specific personality characteristics.” The theory does not attempt to explain all of human personality. There are other traits that it excludes (e.g., honesty, integrity, ethics, conceit, narcissism, humility, ambition, greed, frugality, sense of humour.)

The emergence of the Big Five in the 1980s was significant in the field of personality research, which had been notoriously complex and fragmented in approaches to defining, describing and measuring various aspects of human personality. What was needed was a taxonomy of personality characteristics that could be used as a mapping system or common language, ensuring that psychologists were able to provide accurate and unambiguous descriptions. The Big Five provided such a framework. It remains popular among psychologists and academics, although it is less widely distributed in business, where assessments like MBTI and DISC tend to dominate.