In a Nutshell: Appreciative Inquiry

Appreciative Inquiry (AI) is a popular approach used by OD consultants that was pioneered by a US professor of organisational behaviour called David Cooperrider in the mid 1980s.
In many ways, the emergence of AI pre-dates the positive psychology movement and the strengths movement, which both came to prominence during the late 1990s- early 2000s.

Cooperrider, while studying organisational behaviour at Case Western Reserve University, had observed that traditional approaches to organisational change were notoriously unsuccessful (see John Kotter’s book “Leading Change” for an excellent treatise on this). The standard approach was rooted in problem solving analysis that started from a position of fault-finding in looking at what was deficient, defective, broken, not working or needing to be fixed, rather than looking for the “life giving properties” of human systems and working to build on strengths.

A new positive approach to change became the foundation for Cooperrider’s doctoral dissertation in 1986 called "Appreciative Inquiry: Toward a Methodology for Understanding and Enhancing Organisational Innovation." Cooperrider’s ideas were initially met with resistance when presented to the OD community in the mid 80s, however, a small group of practitioners embraced the basic theory and the popularity of AI has steadily been on the increase since.

In 1987, Cooperrider and Suresh Srivastva published "Appreciative Inquiry in Organisational Life." For many, the article is considered the seminal work on AI calling for a shift in the field from its deficit-based theory of change to a positive, life-centric theory.

Cooperrider was encouraged to write a textbook for the field of AI, but instead encouraged others to propose models and further the development of the conceptual framework. As a result, many interpretations of AI have proliferated and it is inaccurate to say that there is any one official version. “The Thin Book of Appreciative Inquiry” (1996) by Sue Hammond is probably the most well known book on the subject. In the late 1990s, a “4-D" model of Appreciative Inquiry appeared and has come to be strongly associated with AI, which is described below.

Appreciative Inquiry (AI) can most accurately be defined as a philosophy or a way of thinking, and as such a range of definitions of AI are presented here to help explain the concept more fully: 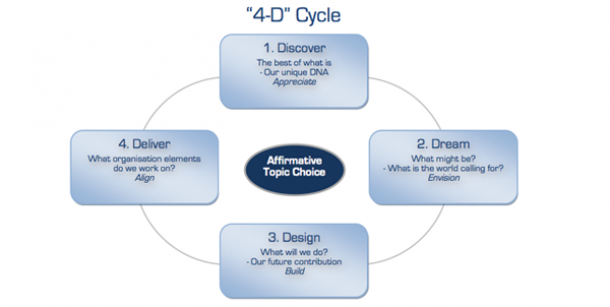 Models of AI: The 4-D Cycle is one of the most common approaches for implementing Appreciative Inquiry:

The model is based on the assumption that the questions we ask will tend to focus our attention in a particular direction and in turn lead to the results we get. The aim of AI is to focus the inquiry around what works, rather than inquiring into what doesn't, since it will tend to produce more of the same.

Some have suggested that a 5th step be added called “Define” and use a 5–D model instead. Cooperrider’s dissertation called this step the “affirmative topic,” which sits in the middle of the cycle, and many models retain this label.

(Above: an example of an adapted 5-D AI model that was developed for work with one of our clients)

The 4-D Cycle of inquiry relies on qualitative interviews to understand the organisation's assets, strengths and potential. For example, if there is a problem with staff turnover, instead of focusing on why people are leaving through exit surveys, an AI approach would focus on why people stay. The line of questioning would start with: “What makes you excited to come to work?” When the line of questioning is too focused on problems and faults, people can get defensive and start to play the blame game. When looking at what works well, people want to be involved and are generally more engaged and enthusiastic about the process.

A real life case study of AI can be found with British Airways (BA), which had identified a problem with lost baggage. Instead of focusing on blaming employees and implementing more processes and punishments, they focused on creating an “Exceptional customer arrival experience.” Employees were asked to “describe times when customers had an exceptional arrival experience.” Through this “appreciative” interviewing process, a number of components of a great experience were identified and this became part of their quest for world-class service.