In a Nutshell: 7 Habits (Covey)

The 7 Habits of Highly Effective People (1989) by Stephen Covey (1932-2012) is one of the highest-selling business/self-help books ever written.As part of Covey’s doctoral dissertation, he studied the ‘success literature’ of American history—self-help, psychology and motivational books—spanning 200 years of writing and hundreds of authors. The findings from this analysis were condensed into the book we now know as The 7 Habits, along with anecdotes, models and frameworks drawn from Covey’s personal life and work as a management consultant.

In his book, Covey reveals that much of the self-help literature since the 1930s was of a superficial nature, swept up in ‘get rich quick’ schemes. Popular titles of this era tended to focus on techniques that would help readers improve their self-esteem, influencing skills and social charm at a shallow level in order to make more money. For this reason, he termed this approach to life the ‘personality ethic’. (How to Win Friends and Influence People, The Power of Positive Thinking and Think and Grow Rich would be the best-known examples of this type of mentality, although Covey does not refer to them by name.)

The ‘character ethic’, on the other hand, is an approach to life that deals with aligning one’s character to universal human principles such as integrity, respect, humility, patience, cooperation and fairness. From Covey's point of view, the material in every book you will ever read on self-help, motivation, personal or professional development that deals with how to be more effective as a human being is secondary to acknowledging this first truth: universal principles are the fundamental source of success. Were there was alignment or integrity between habits and universal principles it would lead to prosperity for the individual; lack of alignment would invariably lead to an avalanche of personal and professional problems.

‘I believe that a life of integrity is the most fundamental source of personal worth. I do not agree with the popular success literature that says that self-esteem is primarily a matter of mindset, of attitude—that you can psych yourself into peace of mind. Peace of mind comes when your life is in harmony with true principles and values and in no other way’. —Stephen Covey

Covey provides Benjamin Franklin’s autobiography as an example of one man’s effort to integrate certain principles and habits deep within his nature. In the same fashion, The 7 Habits is essentially a synthesis of the most powerful principle-based habits that one can seek to integrate into his or her character.

‘The first choice we make each and every day is, ‘Will we act upon life, or will we merely be acted upon?'

This habit could almost be summed up by the following example: Don’t just come to your manager with a problem without first thinking through possible solutions. Being proactive is an attitude towards life that is about more than taking initiative. Proactive people don’t just react to events. They don’t blame their parents or lack of money or bad luck for their problems. In every situation and at any given moment, we have the power and freedom to choose our response (we have ‘response-ability’), even in the most hopeless situation. It is the only thing that can never be taken from us. The power to choose our response—to act and not be acted upon—is probably the most fundamental idea that exists in all the motivational literature. Covey provides Holocaust survivor Viktor Frankl as an example of a person who typified this type of thinking. In The 8th Habit (2004), Covey goes on to say that the power to choose is the most practical, relevant, powerful and timeless idea he has ever come across.

2) Begin with the end in mind

‘If you carefully consider what you want to be said of you in the funeral experience, you will find your definition of success’.

This habit can be thought of as starting with the right goal (or end result) first before getting caught up in the process. This habit can be applied to a wide range of professional and personal situations. Consider, for example, what things you would like people to say about you at your funeral. Will they talk about your work achievements and how much time you spent in the office? Or will they talk about who you were—your character—and how you contributed to others’ lives? This visualisation exercise is perhaps the single most powerful thing one can do to ensure that we are not confusing activity with productivity, or busyness with meaningful achievement.

Once we have a clearer picture of what we want to accomplish with our lives in habit #2, it’s now all about time management. While leadership is about deciding what the ‘first things’ are, management is about putting first things first. Businesspeople are often guilty of spending their workdays on tasks that are urgent but not important, such as responding to emails, phone calls, dealing with interruptions, and attending meetings. They may neglect things that are important but not immediately pressing, like developing a skill set, building relationships or looking after their health. In this section, Covey provides the now famous Time Management Matrix to help people prioritise tasks into one of four quadrants.

‘Win/Win is a frame of mind and heart that constantly seeks mutual benefit in all human interactions’.

Life isn’t a zero-sum game where, in order to win something, someone else must lose something. Even though some businesspeople do seem to have this mentality, it is not a principle-centered approach. Win/Win is based on principles like cooperation, empathy, and fairness. It is not about a mindset of ‘weaknesses’, surrender and compromise. The examples in this chapter will be of special interest to those with an interest in sales, negotiation and performance management.

5) Seek first to understand, then to be understood

Arguably the single most important human skill to learn in life is the skill of empathy. We spend years in school learning our ABCs and multiplying numbers, yet we receive little or no formal training on how to communicate with others. Listening is the most important part of the communication process. Many people don’t really hear what people are saying; they simply wait until it is their turn to speak. In order to influence anyone, you must first understand them: their needs, wants, attitudes and viewpoints. This chapter describes various methods for interacting more effectively with others through exercising the skill of empathy. Another way of looking at this habit as applied to problems and tasks is: ‘Diagnose the situation before you prescribe a solution’. This habit is mentioned as the one Covey had the greatest difficulty with personally.

‘Synergy is the essence of principle-centered leadership… it catalyses, unifies, and unleashes the greatest powers within people. All the habits we have covered prepare us to create the miracle of synergy’.

Think of synergy as ‘team effectiveness on steroids’. The essence of synergy is 1 + 1 = 3 or 9 or 1200. (The sum total is greater than the sum of the parts.) Like the previous two habits, synergise is about the power of mutual cooperation and trust. It also means to value diversity and differences. An example would be a business owner who excels at bringing in new business, but struggles with paperwork, follow-up and operational detail. By bringing in people who have strengths to compensate for the owner’s weaknesses, this allows everyone to do what they do best everyday. This is ultimately how a strong team (and therefore a strong organisation) is built.

‘The single most powerful investment we can ever make in life is investment in ourselves, in the only instrument we have with which to deal with life and contribute’.

‘Sharpen the saw’ means taking time for renewal, personal development and self-reflection. This might be physical (e.g., exercise), mental (e.g., reading), emotional (e.g., volunteering), or spiritual (e.g., meditation). Workplace burnout and stress are significant problems that impact many executives. Covey describes a list of ideas and daily practices to help you feel more like a Zen Master. 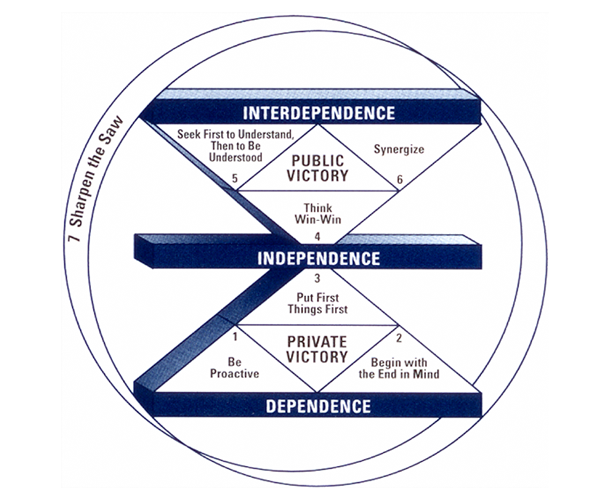 These 7 habits are visually displayed in a framework called ‘The Seven Habits Paradigm’ on page 53. Beginning at the stage of ‘dependence’, mastery of the first 3 habits will move a person to ‘independence’, an accomplishment that is termed ‘private victory’. Mastery of the next 3 habits will move a person to ‘interdependence’, which is higher up and termed ‘public victory’. (Covey considers interdependence to be a higher value than independence.) The final habit, sharpen the saw, encircles the whole diagram as it continues to play an important role at every stage in one’s life journey.