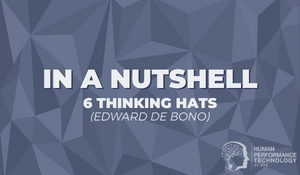 Edward de Bono is best known for his book Six Thinking Hats published in 1985. As a leading author on thinking, creativity and problem solving, de Bono coined the term “lateral thinking”, has written over 40 books, was a Rhodes Scholar at Oxford, and has held faculty appointments at the universities of Oxford, Cambridge, London, and Harvard. The six thinking hats is de Bono’s most well known model, most prominently used in education and business environments.

The six thinking hats is a problem-solving technique used to explore topics, improve the quality and efficiency of decisions, and generate new ideas by examining an issue from a number of different angles. The method can be applied at an individual level, however it is most commonly used in meetings and for group brainstorming. Sometimes, coloured hats or another form or coloured material may be used by members of the group; however, most often the hats are taken as a metaphor for adopting a specific “style” or “mode” of thinking.

When it comes to applying the hats, there are two basic types of uses: “single use” and “sequence use”. With single use, any of the hats may be solicited for a particular type of thinking at any moment. For example, someone in a meeting might say, “I think we need to do some black hat thinking here”. The discussion may then continue as planned, without proceeding to call for another hat.

With sequence use, this involves a group examining the hats in a deliberate order, one after the next (though any hat can be used more than once, the exact sequence doesn’t matter, and not every hat needs to be used). At this time, each participant in the room is (figuratively) wearing the same coloured hat and will present ideas from the relevant perspective, one person at a time. The time allocated to each hat may vary anywhere between 1-10 minutes or more, depending on the subject. Like a courtroom process, objections or disagreements with what others say are put off and given a forum to express, which is done through the black hat. These objections can in turn be dealt with by the green hat.

The most important goal of the exercise is simply to present all the various perspectives from the group in parallel, one mode of thinking at a time, to ensure the full spectrum of thinking is covered—not to get ensnared in a battle of egos arguing over who is right or wrong. This way, all ideas can be put on the table, everyone has a chance to be heard, and ensures the conversation isn’t dominated by only a few people.