The Blake Mouton Managerial Grid (also known as the leadership grid) is a classic model used by managers to assess their leadership style.Proposed by two management theorists, Robert R. Blake and Jane Mouton, in their book The Managerial Grid: The Key to Leadership Excellence (1964), the model maps a leader’s behaviour by plotting coordinates along two axes:

This results in five main types of leadership styles: 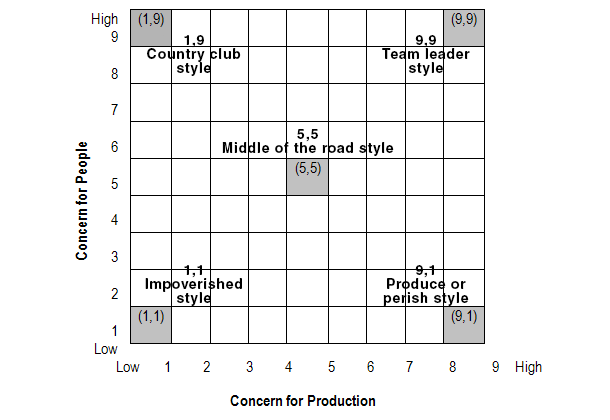 Since first introduced in 1964, the Managerial Grid has gone through a series of updates by the authors, including changes to the names of the five leadership styles; however, the classic model (shown above) is still the most popular version in circulation.

Those familiar with the famed Situational Leadership model by Ken Blanchard and Paul Hersey — a 4-quadrant model that assigns leadership styles according to directive behaviour (X axis) and supportive behaviour (Y axis) — will notice a striking similarity. Much like the two authors of the Situational Leadership model, the two authors behind the Managerial Grid do not advocate a one-style-fits-all approach to leadership. To be effective, the authors agree that a leader must adjust their style to fit the demands of the environment.

For a bit of fun, we decided to re-imagine the Managerial Grid by adding famous TV/Movie characters to make it easier for people relate to each zone. We've tried to select only characters who hold — or who have, at some time, held — either formal or informal positions of leadership within their respective fictional worlds. (Warning: some selections are super geeky.)

Whichever version of the managerial grid you may decide to use in your organisational training, it provides a simple yet powerful model for HR and L&D teams. The model can kick off a leadership training event or executive coaching program, giving managers a good starting point to identify their primary leadership style. This serves as a foundation for creating professional development plans that ultimately shape managers into transformational leaders who drive business results while keeping talent happy, engaged, and retained.