Employee engagement is the degree of emotional commitment that an employee has to his or her job and the organisation as a whole.

In 2007, the American Society for Training and Development conducted a survey of 776 HR professionals, primarily made up of HR Managers and HR Directors, asking them to consider the key indicators their organisation uses to determine what makes an employee engaged, ensuring each reason was to a high or very high extent, which produced the following results:

The first use of the term “employee engagement” was in a 1990 Academy of Management Journal by Yale organisational psychologist William A. Kahn called “Psychological Conditions of Personal Engagement and Disengagement at Work,” in which a person "drives personal energies into role behaviours."

It was only at the beginning of the 2000s that we began to hear the term "employee engagement" entering the mainstream business vocabulary, used as a fresh way of looking at established terms like job satisfaction and motivation. Engagement went further than simply being happy or enthusiastic about one's job, to being passionate, giving one's best effort on a daily basis, displaying intense loyalty and patriotism for the company, and intending to stay. Engagement was largely popularised as a result of survey vendors and management consultancies, in particular Gallup — the consultancy that is widely agreed to have popularised the term — as part of the most in-depth analysis on engagement ever conducted, known as the Gallup Q12.

Engagement is not just about having "casual T-shirt Fridays," or a quarterly offsite team building initiative, or bringing in a motivational speaker once a year. It is primarily an outcome of good leadership, culture, and management practices, which are the things most responsible for shaping employees' day-to-day experiences.

The most common phrase you’ll hear when you start looking for definitions of engagement is “discretionary effort.” (Extra effort beyond what is expected.)

It has been suggested that there are 2 types of DE:

Source: Beyond The Call, Marc Woods 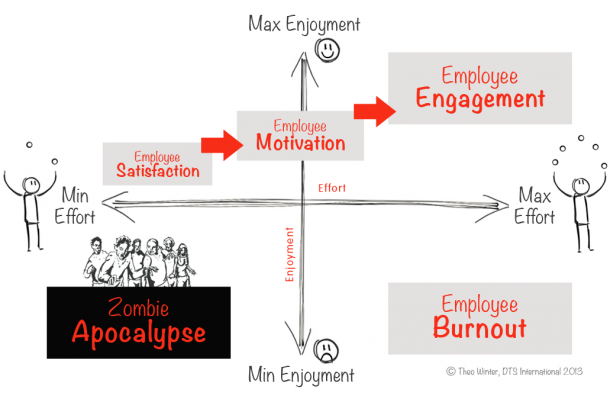 Enjoyment: The state of being happy, energised, or fulfilled. Effort: Physical, mental, or emotional exertion.

What’s the Difference Between Satisfaction and Engagement?

Being happy and content in one's job doesn’t necessarily mean that the employee is connected to the company’s vision/mission/values, or that they will “go the extra mile” in their work.

What’s the Difference Between Motivation and Engagement?

Motivation is often short term, due to a specific incentive, e.g., “Get X bonus if X project is completed by X date.” Engaged employees are already passionate about giving their best.

“Most see engagement as a step higher than satisfaction or motivation.”

Gallup. First, Break All The Rules (1999). Gallup has done the most comprehensive analysis of employee engagement of any company in the world. As part of their research, they found 12 things (the “Gallup Q12”) that best predict engagement and performance, which were published in First, Break All the Rules by Marcus Buckingham and Curt Coffman (two Gallup researchers).

Daniel Pink. Drive: The Surprising Truth About What Motivates Us (2011). Drive provides a comprehensive summary of four decades of scientific research on human motivation, looking at three elements in particular that are central to employee engagement: autonomy, mastery, and purpose.

Gallup, as well as many other researchers, have consistently found that only about 20-30% of the general working population are engaged, while the rest (70-80%) are either not engaged or totally disengaged.

Engagement scores (the most common form being a 0-100% rating) represent a useful way of understanding the relative productivity and happiness of employees within certain business divisions, teams, or in the organisation as a whole. Engagement scores therefore may be viewed as one of the key indicators for helping managers understand how well they are doing their jobs.

Broad benefits of having engaged staff include:

The Business Case for Engagement

In short, research has proven that employee engagement consistently affects all key performance outcomes in a business, regardless of the type of organisation, industry, or country. 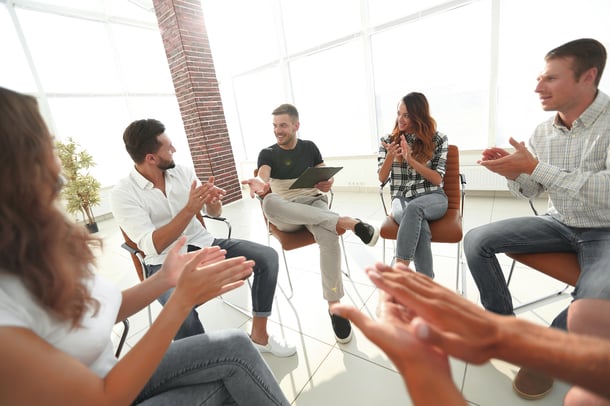 The Top Drivers of Employee Engagement (with research studies).