Driving Forces™ is a new report that provides an enhanced way of assessing people’s motivators. The existing report for measuring motivators is called Workplace Motivators (MOT), and the new Driving Forces (DF) report is its natural successor.Both DF and MOT are based on Eduard Spranger’s 6 primary types of human motivators and use the same questionnaire. The two main differences between the old report (MOT) and the new report (MOT) are the scoring method and the language used to describe each motivator.

Whereas MOT only looked at 6 core human motivators, DF now expands these out to 12.

Explaining the ChangeBy having 12 dimensions, we are now able to more clearly illustrate the importance of LOW scores, which were often overlooked by using the old MOT graph.

Research has shown that people's lowest score in the old graph can actually be their STRONGEST motivating factor. In other words, when we passionately dislike something, the motivation to avoid that thing can be more intense than our drive to gain something we value.

For example, looking at the Theoretical motivator in the MOT graph below, we can see it is very low. This might lead people to conclude that the person doesn’t value knowledge and learning.

However, if we look at the same score on DF, we can see it falls at the extreme end of the Instinctive Driving Force (left side).

The description for the Instinctive Driving Force makes it clear that the individual does not hate learning; they simply desire to learn what is necessary, rather than what is theoretically enriching. The Intellectual Driving Force is about the latter: intellectual gratification and learning for the sake of learning.

As you can see from the graph below, a high score in Theoretical on the MOT graph translates into a high score on the Intellectual Driving Force.

The Importance of "Low" MotivatorsIn the real-life MOT graph below, we can see that the Theoretical is highest, followed by Aesthetic and Individualistic. Most consultants and coaches would focus the conversation with their client around these factors, without realising they're missing something crucial. 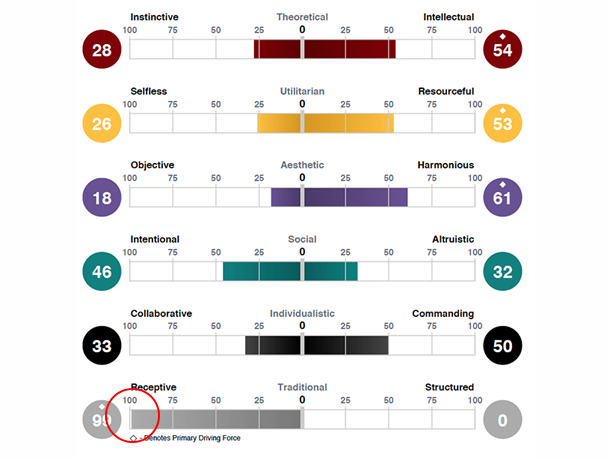 This information totally changes the conversation, which is precisely what makes Driving Forces so useful: you have a picture of motivation that is much more closely aligned with reality.

For those who want to understand how the new scoring method works, it's actually quite simple.

When people rank items from the questionnaire higher in the order, this moves the scale to the right (indicating what the person identifies with MOST).

When people rank items lower in the order, this moves the scale to the left (indicating what the person identifies with LEAST).

The final outcome for each motivator is converted into a percentage score, which is represented visually in the scale you see below.

The definitions, as the they appear in the Driving Forces report, are as follows. 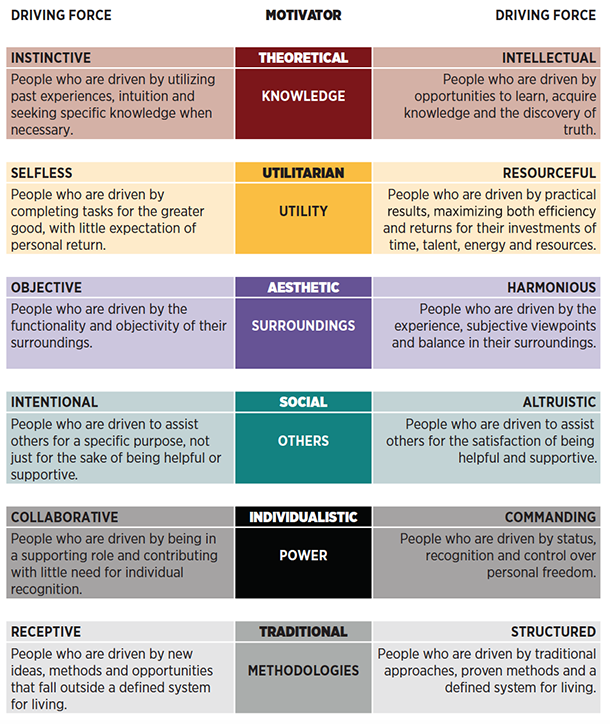 If you are currently using the Motivators report and would like to include Driving Forces™ in future reports, simply call or email us. If you're not already using either kind of Motivators report, contact us today to get your free sample report.