Executive coaching offers individuals the opportunity to work with an accredited coach and develop their skills in a safe and collaborative environment that enhances professional performance. Coaching can improve self-awareness, support behavioural change and challenge ways of working to help an individual achieve their potential (to name a few).

One way to accelerate a coaching relationship and expedite results is to gain a deep understanding of the executive (“the coachee”) quickly. To do this, a coach could analyse the executive’s behavioural style (DISC), personal drivers or motivators (12 Driving Forces), and understand how actively they apply the principles of emotional intelligence (Emotional Quotient).

These three areas paint a full picture of an individual’s performance across multiple layers.

Many coaches use these tools and take a multi-science approach with TriMetrix EQ, which is a powerful combination of the three tools listed above. Coaches do this as a part of their coaching practice so they can understand what to expect from that person, how to best work with that individual, and how to form more powerful questions to enable strong results from the coaching process.

Let's have a look at the following example to understand how using TriMetrix EQ in the beginning of a coaching relationship would be useful. 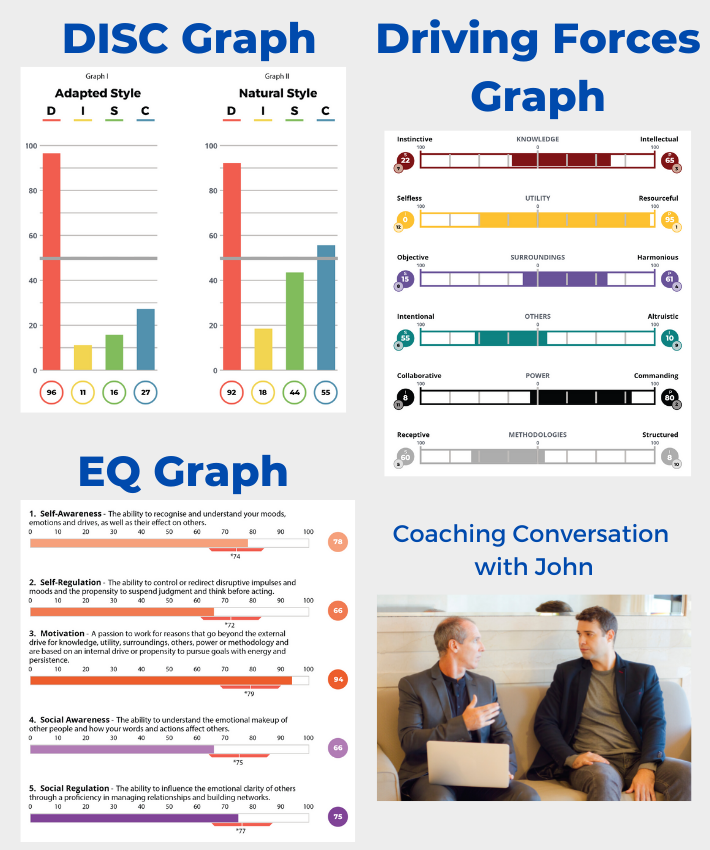 The most striking feature about John’s three profiles is the high task-orientation.

This is not the latte sipping, lar-de-dar conversation type. Expect him to get straight to the point and use short sentences. John will be assertive and direct in his communication preferences. He won’t hesitate to let you know what’s on his mind. If he has a problem with something you said, he will let you know about it.

John will respect a coach who is a real-world thinker with a strong practical mentality, who can talk to him in terms of R.O.I (return on investment). He will respond better to someone who is willing to stand their ground, compared to someone who tries to be his friend and win his approval.

John is the kind of person who respects hard facts, data and logic, not opinions and feelings. As a coach, be prepared for someone who is tough-minded, potentially cold, and even blunt at times. He will respond well to someone who is an honest, straight-shooter.

With John’s high Commanding Driver, he is driven to be recognised as an individual and values opportunities to set himself apart from others. When ‘selling’ or presenting him with a new idea, John will gravitate towards anything that you can link to advancing his career position or status.

The relationship of these three graphs indicates that John is very goal-driven, very results-focused, and is passionately interested in getting a return on investment for his time, energy, effort and money. With this combination, he might even tend to steamroll people to get to what he wants without considering them in his actions.

One of the areas that you can expect John to be facing troubles within his career (or personal life) is managing relationships.

This means that the people around him may perceive him as bossy, rude, detached and even indifferent to their feelings — the impact of which he may be completely unaware.

John will need to work hard to actively apply the principles of emotional intelligence, to ensure that his natural task-focused nature doesn’t sideline, or take the front seat, over his relationships. Selling John on the economic benefits of becoming more emotionally intelligent might be a good starting point.

Insightful Questions to Ask Based on this Snapshot View

This question is based on the movement seen in the Natural versus Adapted DISC Graph in the C spectrum.

This question is based on the movement seen in the Natural versus Adapted DISC Graph in the C spectrum.

This question is based on the movement seen in the Natural versus Adapted DISC Graph in the S spectrum.

This question is based on the high Resourceful Driver in the Driving Forces Graph.

This question is based on the lower-than-average activity levels on Social Awareness in the EQ Graph.

Things That are Most Likely to Annoy John

Wondering how to improve your skills as a coach? Imagine having all this information BEFORE you even meet John face-to-face. Do you think it would improve your coaching model?

If so, you may be interested in attending our Science of Self™ Accreditation to introduce the TriMetrix EQ into your business and coaching approach.

Note: This article was originally published in May 2012. It was refreshed and republished in June 2022 with up to date graphs, information and context.