A Simple Model of Employee Engagement

Below is a simple and fun diagram that we first developed in 2013 to help explain what engagement looks like and, in particular, how it differs from the likes of employee satisfaction as there is often confusion between the two terms. 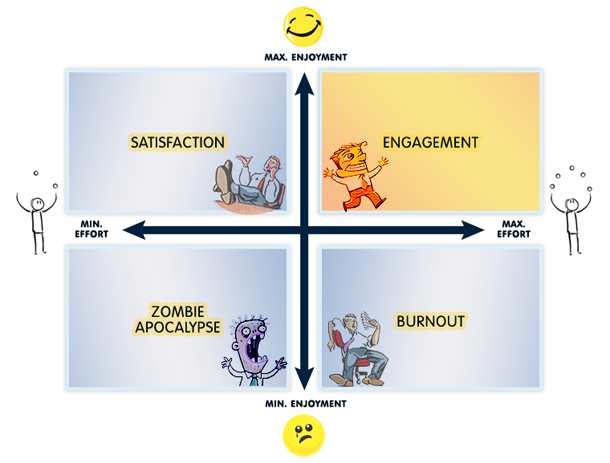 When you decouple effort from enjoyment, you are left with a content worker who does not see the point in going the extra mile, and when you decouple enjoyment from effort, you are left with a hard worker who is dissatisfied. The complete absence of both effort and enjoyment in the workforce leads you into the least desirable position within the four quadrants: the zombie apocalypse. It’s only when you combine effort and enjoyment together that you have the essential elements for engagement.

This 4-quadrant framework falls in line with a current CCL definition of engagement:

“Engagement in this report is defined as satisfaction with job and commitment to the organisation.”

— Centre for Creative Leadership (CCL), Employee Engagement: Has It Been a Bull Market?, 2010

Originally, the creation of this model, which we might call the Effort-Enjoyment Model of Engagement, was actually spurred as a result of encountering the following quote: “Researchers in burnout define employee engagement as the positive antithesis of burnout (Maslach et al. 2001).” This is partly true, however, we don't believe it's the full picture. If a fully engaged person is someone who loves his/her job and goes the extra mile, then a fully disengaged person is most likely to be someone who hates his/her job and does as little as possible (and might also include someone acting as a destructive force within the business). In the engagement literature, this is sometimes referred to as a "toxic" or “zombie” employee.

The zombie employee is the true antithesis of the engaged employee. Gallup would describe this group as the “actively disengaged” (those who are effectively undermining the business in which they work) and have found they consistently make up 20% of the working population in many Western countries like Australia, the US and the UK.

Another business-friendly model we recommend with similarities to our own is The X Model of Engagement (pictured above) by Blessing White. They provide what is probably the best video introduction on the topic of engagement that we’ve seen of any company, describing full engagement as the intersection between maximum satisfaction and maximum contribution. This concept parallels our Effort-Enjoyment model, although we discovered the creation of the Blessing White model actually pre-dates our own. (You can see that the models are essentially identical by rotating our model counter-clockwise until it resembles the letter "X.")

From our perspective, engagement is a type of psychological state — one that might be arrived at through the influence of various internal and external factors — featuring strong emotional connection, identification and commitment to one’s work and workplace, which is evident as a result of high levels of discretionary effort and personal satisfaction. (Of course there are many other definitions of engagement to go by depending on your personal preference. See our post: 25 Definitions of Engagement.)