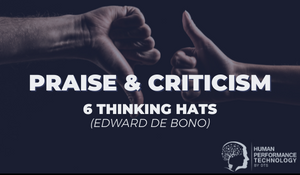 The six thinking hats is Edward de Bono’s most well known model. It is a problem-solving technique used to explore topics, improve the quality and efficiency of decisions, and generate new ideas by examining an issue from a number of different angles.

This article is an extension to our "In a Nutshell" series. To read our original overview of the six thinking hats model click here.

One of the great strengths of the six hats model is its design as a type of “parallel thinking”, which is an alternative to argument. In parallel thinking, each thinker puts forward his or her thoughts in parallel with the thoughts of others, rather than attacking the thoughts of others. De Bono notes that it is typical in many cultures (particularly Western culture) to rely on a traditional argument method, which is often unfriendly, personal, messy, inefficient and non-constructive. When used properly, the six hats method has the potential to alleviate all of these issues.

In terms of learning difficulty, the six hats method is one of the most intuitive business models, can be applied almost immediately (though more in-depth formal training by authorised trainers is recommended), and is widely transferable to any industry and age group old enough to engage in analytical thinking tasks.

Perhaps most valuable of all, the six hats model provides a formal language to request specific types of thinking. Without a formal language, people can resort to vague, insensitive, and personal critiques of others’ thinking. De Bono notes the great strength of the method is its artificiality. For example, instead of saying, “Don’t be so negative” to another team member who raises an objection in a meeting, the participants can understand that the person is attempting to operate from the black hat perspective in order to minimise risk. The manager might respond by saying, “That’s good black hat thinking. Let’s stay with the white hat for now and we’ll discuss that together as a group in a moment”.

An important benefit of the model is that the six hats help to ensure that no mode of thinking is neglected or discounted and people don’t get bogged down in one mode of thinking too much. For example, in highly data-driven and scientific industries, the black hat is often given a disproportionate amount of influence. Someone who tends to be highly critical (black hat) most of the time in meetings may be required to consider a new perspective—this time looking at possible solutions (green hat). By doing this regularly, the person might discover new options or ideas that didn’t initially seem viable on the surface and would have otherwise been discarded.

Similarly, people who are overly optimistic thinkers (yellow hat) may be considered “unrealistic”, which may stifle the proposal of new ideas. There is also equal opportunity to express emotions, gut feeling and intuition (red hat), which people often fear to express in a business setting because they might be viewed as “fluffy” or “irrational”. The six hats model is so useful because it provides a common language to ensure all the major ways of thinking about an issue are covered.

Ultimately, the simplicity, formality and neutrality of the six thinking hats method makes it an excellent tool to guide conversation, shift into new modes of thinking quickly, reduce the potential for conflict, reduce meeting time, and effectively analyse issues and generate new ideas by focusing on one theme at a time. It can be applied to any situation where solving problems is important (either within groups or on one’s own)—thus making it universally applicable.

A final point of difference about the model involves the consequence of using coloured hats and rules: Many people feel like they are playing a fun game and this typically makes the experience more enjoyable for all.

In the preface to the new edition of Six Thinking Hats (1999), de Bono’s opening statement has been strongly criticised: "The Six Thinking Hats method may well be the most important change in human thinking for the past twenty-three hundred years. That may seem a rather exaggerated claim but the evidence is beginning to point that way". To support this claim, de Bono lists a small handful of examples highlighting how the six hats method has impacted the lives of individuals and companies. These include: “A researcher from a IBM laboratory told me that the Six Hats method has reduced meeting times to one quarter of what they had been", and "In a simple experiment with 300 senior civil servants, the introduction of the Six Hats method increased thinking productivity by 493%”.

De Bono does not give any additional detail or references to these examples for further follow-up analysis. Since the author providing these examples is the creator of the method, the reader is inclined to treat such claims with a degree of scepticism. It may well be that the six hats method has led to dramatic improvements in meeting time, cost savings, and improved productivity, but the selective and anecdotal nature of the examples—without reference—does not make it possible to verify these claims. A period of 14 years elapsed between publication of the first book and the revised version. Given the length of time available to collect and record data, the reader is inclined to wonder why only anecdotal evidence is offered if it is indeed such an important development in human history.

How does the six hats method compare to other types of structured thinking tools? Is there something inherently superior about the six hats method or would similar results be produced with another structure? What would be the result of using five hats or four hats instead of six? The problem here is that the model is wrapped in extravagant claims by the author, and yet the scientific data to support these claims is not very robust or credible.

From a practical perspective, critics consistently point out that the method is far more valuable as a brainstorming or group activity than as an individual method for problem solving. This further dents the credibility of the idea that de Bono’s method is the most important change in thinking since the ancient Greek philosophers.

The six hats model has the potential to be misapplied to meetings, discussions, and problem solving activities when it is not the best tool to suit the situation. For example, in a group scenario, the structure of the method attempts to minimise back-and-forth argument. This might be advantageous for a group activity in which negotiation or idea generation is the primary objective; however, the dynamics of discussion in business settings are complex and there are cases where the six hats method may interfere.

De Bono notes the great strength of the method is its artificiality, but this also comes with its drawbacks. For example, when dealing with the red hat, de Bono writes “there should never be any attempt to justify the feelings or to provide a logical basis for them”. People may find these sorts of rules work well in some situations but not in others. Some critics claim that the six hats enforce an artificial structure then is not natural, feels cumbersome or silly, and may lead to confusion about the “right” thing to say when in a particular mode of thought—thus wasting (rather than saving) time.

Similarly, because the six hats method sets out to apply a set of formal labels to modes of thought, people are naturally prone to make personality associations (e.g., “David is a black thinker"). De Bono warns “that temptation must be resisted”. In spite of his attempt to head off this issue by raising it in the introduction, this is one of the more obvious potential misuses of the model.

Another potential danger of the model is the excessive influence of the chairperson who wears the blue hat. While de Bono makes it clear that any member (in theory) can partake in blue hat thinking, it is very common in practice for a single leader, facilitator or chairperson to function in this role. This raises questions about the potential abuses of power. For example, if a manager is biased towards a particular idea, she may use the hats in a desired sequence, exert undue influence on the process, and shift the conversation in a favourable direction to support her agenda. The influence of the chairperson is an area that de Bono could have explored in more detail.

A final issue addressed in the revised 1999 edition is the sequence of how people use the hats. De Bono discovered that there where some people who allocated different hats to members in a meeting for the entire duration of the meeting. De Bono is critical of this practice: “That is almost exactly the opposite of how the system should be used”. However, if this practice was occurring frequently enough to address it in the revised edition, it is possible that the process was not clearly communicated. This issue could have been addressed with more detailed analysis of how to use the hats with different sized groups, included specific time allotments and example sequences in which switches between hats are likely to occur. Some critics have argued that a level of practical guidance is the main thing still lacking from Six Thinking Hats, although this has been addressed to some extent by the development of facilitation materials and accreditation workshops.